Last week, the market broke out to a new multi-year high on strong earnings releases. More than half of the S&P 500 has reported and three quarters of the companies have exceeded top and bottom line estimates. Profits are up more than 25% year over year and stocks are attractively valued.

Sunday evening, President Obama addressed the nation and we learned that Osama bin Laden was killed. The fact that we could not capture or kill him for almost 10 years (even with a $25 million bounty) was a source of embarrassment for our military. Bin Laden gave hope to Al Qaeda and this is a major blow. From a market standpoint, the S&P 500 futures were up five points before the news and they have barely budged.

The focus will shift from earnings to economics/politics this week. There are many developments that could impede the market rally.

Over the weekend, China released its PMI. It came in at 52.9 versus estimates of 53.9. This was weaker than expected and we might be seeing early signs of a slowdown after aggressive monetary tightening. Many analysts feared that China would hike interest rates, raise reserve requirements or propose capital gains taxes this weekend. That did not happen and I believe this is the reason the S&P 500 is trading higher. China’s aggressive tightening is not over and eventually their economy will contract. That will not be good for global markets.

Credit concerns in Europe will continue to grow. In the next week, EU officials will visit Greece to discuss debt restructuring. Their interest rates have skyrocketed and analysts believe this is unavoidable. Banks will take losses and we will be able to gauge their exposure to other sovereigns. Portugal is waiting for its aid package and that will be revealed this week. Greece and Ireland have been dissatisfied with their “deals” and we will see how Portugal reacts.

The EU established a new credit facility last fall. The market supported the idea and credit concerns were temporarily eased. This allowed our market to stage strong rally. Unfortunately, EU members have not been able to agree on the policies for future bailouts and the credit facility has not started raising money. These policies need to get hammered out soon and the rhetoric between strong nations and weak nations will be heated. Investors will worry as a rift in the EU is created.

Congress has returned from its Easter break and it will try to get enough votes to raise the debt ceiling. In two weeks, we will hit the limit and our nation will start to default. The market won’t wait for this to happen; it will force politicians to take action. We are likely to see a swift, deep one day decline. Only then will politicians grasp the magnitude of the situation. This sell-off will prompt them to quickly raise the debt ceiling.

The economic calendar is very heavy this week. ISM manufacturing and ISM services will be released. Both numbers are near historic highs and I believe they will pull back. On an absolute basis, the numbers will still be strong, but the market won’t like the fact that they are rolling over. This will not cause a major market decline. Jobs are the more critical data point. Initial claims have been increasing the last three weeks and that could weigh on Friday’s Unemployment Report. Jobs are the key to a sustained economic recovery and any decline will raise concerns. Expect to see nervous trading ahead of the number.

Stocks typically rally the first few weeks of earnings and then they stall. The good news is “priced in” and the fact that we are not up huge on the bin Laden news tells me this rally is about to stall. Given the other influences above, I believe we could roll over very soon.

Shorts were forced to cover last week and bullish speculators piled in on this breakout. The VIX is at multi-year lows and confidence is high. This means that conditions are ripe for a pullback. Profit-taking will set in after a nice run-up and investors will head for the sidelines as storm clouds approach. The market will reverse and it will break below support at SPY 135. Bullish speculators will bail on long positions and this will create additional selling pressure. Once the market rolls over, a negative tone will be set for the rest of the month.

You should have taken partial profits on your long call positions Friday and you should continue to sell into strength this morning. Scale out of your bullish positions and reduce your risk exposure by 75% in the next few days.

It’s still premature to get short, but I will be selling out of the money call credit spreads later this week. I will also be ready to purchase puts on weak stocks if the SPY closes below 135. Financials have not been able to rally, making them attractive shorts. 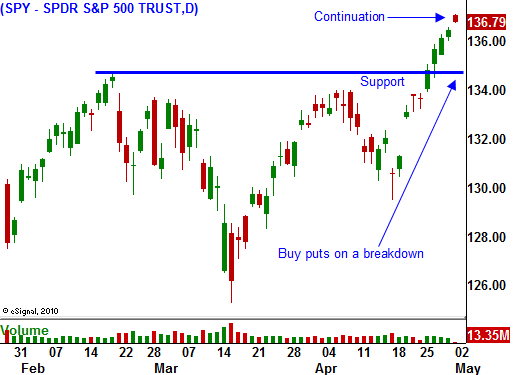