If you like my daily comments, spread the word. I put countless hours into my research and my forecasts are accurate. Site traffic (not advertising revenue) motivates me. Send an e-mail with a few sentences promoting www.1option.com to 5 of your friends and cc {encode=”[email protected]” title=”[email protected]”}. When I get the e-mail I will send you a link to tomorrow’s webinar – free. It will include two new option trades. This event normally costs $49.95.

Last week, strong earnings pushed the market to a new relative high. Some of the strongest companies report early in the earnings cycle and this type of rally is typical. Good news gets priced in across all sectors and much of the firepower is exhausted. Once half of the companies have announced, the momentum stalls. We are currently at this juncture and I expect the seasonal pattern to continue.

The focus will shift to economic releases this week. ISM services and ADP employment will be released tomorrow. The ISM services number is near historical highs and I am expecting a slight pullback. The number will still be strong, but traders might not like the fact that it is rolling over. Yesterday, ISM manufacturing declined slightly. It was also near historic highs.

ADP employment is expected to show 200,000 new jobs in the private sector. It could hit that number since it focuses on small to medium size businesses. I don’t believe Friday’s Unemployment Report will be as “market friendly”. Federal and state job cuts will weigh on the number. During the last three weeks, initial claims have climbed and a weak number Friday could spark profit-taking.

The Treasury Secretary said that he can go into emergency mode and stretch funds to August 3rd. If politicians can’t agree to raise the debt ceiling, the government has a little time before it defaults. State and local checks from the government would be halted under his proposal. It would have been better not to disclose this information. Now Republicans and Democrats can drag their feet. The market won’t like this uncertainty.

EU officials are in Greece discussing debt restructuring. Most analysts believe that this process is inevitable. For the time being, Greece is only considering an extension of maturities (as opposed to interest or principal reductions). This is the least severe of the alternatives. European banks have considerable risk exposure to sovereign debt.

Portugal now believes it will need €100 billion in aid. Analysts doubt that the EU will lend beyond the €80 billion target. The terms of the loan will be presented to Portugal this week and we will be able to gauge their reaction. Credit concerns in Europe will escalate in coming months.

China did not tighten as many traders suspected. This was welcome news for the market, but it doesn’t mean they are not going to take action. Recent tightening has come in frequent intervals and China’s economy is still strong. They are trying to get ahead of the curve and they will succeed. In addition to interest rate hikes and higher bank reserve requirements, they are considering currency revaluation (Yuan +10%) and capital gains taxes. A slowdown in China would impact global economic activity.

The upward momentum has been strong enough to generate a market breakout. Yesterday’s news of Osama bin Laden’s death should have sparked a nice rally. Beginning of the month buying should have also supported a rally. By mid-morning, stocks pulled back from their highs and finished unchanged. This reversal off of a new high was a sign of weakness.

I have been advising you to take profits the last few days and your long call positions should be much smaller. Continue to scale out of bullish positions and have no more than 20% exposure by the close Thursday. If support at SPY 135 fails, exit all call positions and buy puts. 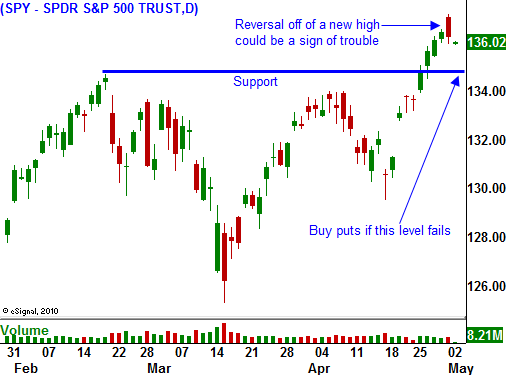