Sell In May and Go Away! Live Webinar Tonight – Spread the Word – Get In Free

If you like my daily comments, spread the word. I put countless hours into my research and my forecasts are accurate. Site traffic (not advertising revenue) motivates me. Send an e-mail with a few sentences promoting www.1option.com to 5 of your friends and cc {encode=”[email protected]” title=”[email protected]”}. When I get the e-mail I will send you a link to tonight’s webinar – free. It will include two new option trades. during the last event we bought calls on HLF. the stock jumped $15 this week. This event normally costs $49.95. I will stop sending the link two hours before the event. Send your e-mails early.

Last week, I suggested selling long call positions into strength. That was the final stage of this rally and stocks are likely to come under pressure in coming weeks. I also stated that you should exit all call positions if the SPY trades below 135. As I write today’s market comments, that support has been breached.

Profit-taking has set in and bullish speculators that loaded up on the breakout are about to puke their positions. That will spark a swift decline in coming days.

As I’ve stated, stocks were fully priced after excellent earnings releases and the firepower was exhausted. Once the focus shifted to economic releases, I suspected trouble.

This morning, ISM services fell to 52.9 from 57.3 in March. That was a huge decline and the number is weighing on the market. ADP employment also came in lighter than expected. Analysts were looking for 200,000 new jobs in the private sector and only 179,000 jobs were created. As I mentioned yesterday, I believe ADP will actually outperform Friday’s Unemployment Report. The private sector has been the source of job growth and ADP measures small to medium-sized businesses. Larger companies will be more cautious and we know the public sector is laying off workers. Friday’s Unemployment Report has the potential to miss by a wide margin. Initial jobless claims have increased three straight weeks and that is a warning sign.

The news from China is also weighing on the market. There were a number of hawkish statements by officials. Inflation is their number one concern and they will take action. Many analysts believe that a rate hike is likely in coming weeks. They could also raise bank reserve requirements, revalue the Yuan (+10%) and imposed capital gains taxes. Given the frequency and the magnitude of the actions taken this year, they will not stop until inflation is contained. All of these measures will dramatically slow growth. As China contracts, global economic activity will decline.

Portugal will receive €78 billion in aid from the EU. While this is welcome news, the interest rate has not been disclosed. Greece and Ireland are not happy with the rates they are paying and this problem is far from over. Yesterday, Portugal stated that it needs €100 billion and his package falls way short.

EU officials are also discussing debt restructuring with Greece. Most analysts believe this is inevitable. The most passive form of restructuring is to extend maturity dates and that is all Greece is willing to consider. Credit issues will continue to escalate in coming months and the EU has not agreed on bail out policies for the new credit facility. As they attempt to do so, the banter between nations will become heated and a rift will be created.

We have issues of our own and the US debt ceiling will be hit in a couple of weeks. The Treasury Secretary said that he could stretch funds out to August if they stop payments to state and local governments. This simply extends the date and Republicans/Democrats can continue to argue. Politicians are playing with dynamite and the market will not like the indecision. A swift, steep decline will wake up Washington DC and the ceiling will get raised. Unfortunately, that will happen after market chaos has occurred.

It is time to ease into short positions. Stocks tend to falter near the end of earnings season and the Unemployment Report Friday should be weak. Support has been breached and seasonal weakness is upon us (sell in May and go away). You should be out of all call positions and you should start buying puts.

Look for continued weakness into the close today. 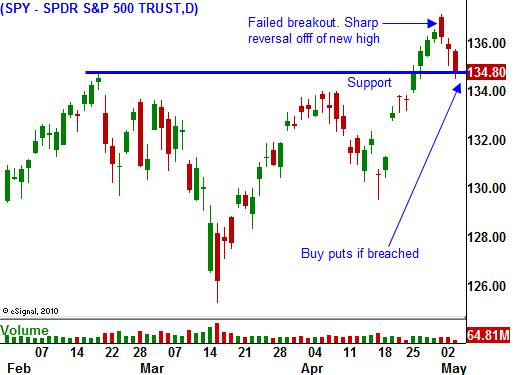