This week, the market rally has lost its momentum. The focus has shifted from earnings to economic events.

Many analysts believed that China would tighten over the weekend, but they did not. The market briefly rallied when no action was taken. However, officials quickly pointed out their commitment to curbing inflation. Many analysts believe they will hike rates in the next few weeks. Bank reserve requirements could be raised and the Yuan could be revalued (+10%). They are even considering a capital gains tax hike. Needless to say, they are taking progressive steps to slow down economic growth. Any contraction will be felt around the world.

EU officials are in Greece to discuss debt structuring. It is likely that bond maturities will be extended so that the country can avoid default. This is the most passive form of restructuring and is the only one that is being considered. Portugal received €78 billion in aid from the EU this week. They do not know the terms. Greece and Ireland are not happy with the rates they are paying and Portugal will not be happy either. They are not in a position to complain since they will still need another €22 billion in funding to satisfy obligations. The euro credit crisis will continue to escalate.

The EU has not been able to ramp up the credit facility established last fall. Bailout policies and procedures have not been defined and members can’t reach an agreement. A rift has been created and the rhetoric between strong and weak nations will be heated in coming weeks. Investors will question whether the EU can stay unified.

In the US, our nation is close to hitting the debt ceiling. Republicans are using this as leverage to get guarantees on budget cuts for 2012. If Democrats agree, the ceiling will be raised by $2 trillion. If not, our nation could default on its bonds. This would wreak havoc on our market and traders won’t wait until the deadline. They will start selling stocks well in advance. Unfortunately, we will have to experience a nasty selloff before politicians realize they are playing with dynamite.

The economic news has not been good this week. The service sector accounts for 80% of our economic activity and yesterday, ISM services declined dramatically. Wednesday’s ADP employment index showed smaller job growth in the private sector than was expected. Initial jobless claims have been climbing the last few weeks and this morning, jobless claims spiked to 479,000. That is the highest level in many months. Analysts are expecting 185,000 new jobs in tomorrow’s Unemployment Report and the probability of a big “miss” is high. Jobs are the key to sustained economic growth.

Q1 earnings season is well past the midpoint and good results are priced in. It is typical for the market to roll over as the announcements wind down. Profit-taking has set in and bullish speculators that rushed in to buy the breakout are about to have the door slammed in their face.

The credit crisis in Europe kept a lid on the market last summer. Stock valuations were very attractive and as soon as the EU formed the new credit facility, this worry was lifted. That paved the way for a massive eight-month (35%) rally. Now those same issues will haunt the market again. The EU will rise to the occasion and they will get the policies ironed out this summer (it won’t be easy). China has agreed to support Spain’s bond auctions and the threat of an EU meltdown is small in the near future.

An economic slowdown in China is not only possible, it is likely. They are slamming on the brakes and this poses a real threat to the market this summer.

We have been taking profits on our call positions during the last week and you should have sold your remaining calls yesterday when the SPY traded below 135. I also suggested scaling into put positions. Those are paying off nicely this morning and I am expecting weakness tomorrow. The market has been resilient this morning. Wait for the bounce off of the lows to run out of steam and buy puts. Stocks should decline into the closing bell.

I like stock valuations, but the dark clouds on the horizon will rule the day. Sell in May and go away. 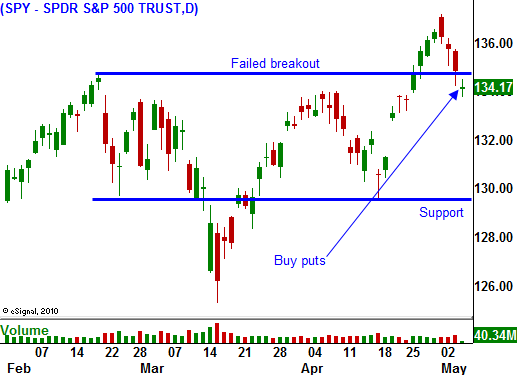