Hawkish statements from China and soft economic data in the US created selling pressure Thursday. This morning, the Unemployment Report has calmed nerves. In April, 244,000 new jobs were created. That is much better than the 185,000 jobs analysts expected. Stocks are up before the open and yesterday’s losses will be erased.

The jobs releases contradict each other. I consider initial jobless claims to be one of the most accurate economic releases. It fluctuates week to week, but the four-week moving average is very reliable. For the last month, states have been reporting increases in unemployment applications. ADP is another source of jobs data. It actually processes payrolls for small and medium-sized businesses. I consider their data to be focused, but accurate. In both instances, jobs are not being created.

Today, we will see how much faith the market puts into the government’s number. I expect to see an early rally, but the upside is rather limited. With all of the “dark clouds”, stocks will have a difficult time challenging the highs of the year. In fact, I wouldn’t be surprised to see resistance at SPY 135 hold.

Credit issues in Portugal and Greece will be resolved on a temporary basis. However, the rhetoric between countries will be heated in coming weeks as they tried to forge EU bailout policies.

Politicians are using the debt ceiling as a battleground. The probability of a large decline grows each day that the ceiling is not raised. By May 16th, it will be touched. The Treasury Secretary says he will be able to stretch funds for a couple of months to avoid default, but the market will not like the indecision.

China is slamming on the brakes and its economy will slow. They have raised interest rates and bank reserve requirements many times this year and they are ready to take action again. China is committed to curbing inflation and it will succeed. The tightening in 2011 has been frequent and deliberate. Unfortunately, all of these measures will result in economic contraction. A slowdown in China will affect the world.

The market will have to navigate these issues in the next two months and I believe we will see a period of consolidation. In the next few weeks we could establish the low end of a trading range that will last all summer. I am not overly bearish, but the probability of a swift decline in the next few weeks is high.

As the morning wears on, I expect to see the rally stall. Yesterday’s commodity collapse tells me that bullish speculation is too high and it needs to get flushed out. If bulls can’t advance the rally by mid-day, the market will give up some of its early gains and the action will be soft into the close.

I will wait to see how the day unfolds, but as long as the market stays below SPY 135, I will add to put positions.

Sell in May and go away. 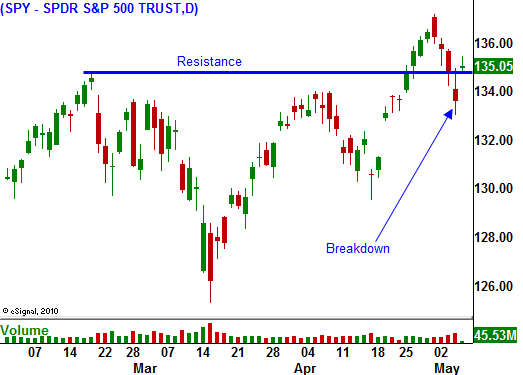