Debt Ceiling Needs to Get Raised This Week. If Not – Prepare For A Swift Decline

Last week, the market rolled over breaking support at SPY 135. That level is significant because it represented a new high for the year when we ran through it two weeks ago. That breakout did not hold and bullish speculators who rushed in will soon get flushed out of their positions.

The employment news last week was inconsistent. Jobs are the key to a recovery and initial jobless claims have been rising swiftly week after week. This is a very current and reliable piece of economic information and the four-week moving average is an excellent indicator of employment trends. ADP processes payrolls for small and medium-sized businesses. It also has its finger on the pulse of private sector jobs. Analysts expected 200,000 new jobs in April and only 185,000 jobs are created. Both of these numbers set the table for a disappointing Unemployment Report.

Friday, the government released statistics and 244,000 jobs were created in April. This was much better than expected and the futures rallied 16 points on the news. The rally was tenuous and traders did not fully embrace the number. By the end of the day they found an excuse to take profits.

EU officials have been meeting with Greece to discuss debt restructuring. Rumor has it that Greece might passively extend maturity dates in consideration for better terms for its current loans with the EU. There were also rumors that the talks were not going well and that Greece was threatening to pull out of the EU. This would be an insane move since it would immediately default. The market declined on the rumor and fear is growing.

Ireland wants to renegotiate the terms of its bailout. It feels interest rates being charged are too high. EU members (Germany) want Ireland to raise corporate taxes so that the playing field is level. Neither will give in and this conflict represents the growing rift between strong and weak nations. The EU needs to forge its bailout policies and the arguments will be heated in coming weeks. Portugal’s bailout terms will be presented in the next week or two and we can assume they won’t be happy either.

The EU credit crisis can continue for a long period of time as long as Spain’s bond auctions go well. It is too big to bail and too big to fail. China has agreed to support their bond auctions and interest rates are high, but stable. That means the arguing and indecision within the EU can continue for many months without any consequences. The banter will weigh on the market as the unity is deteriorates.

In the US, Politicians are squabbling and Republicans want 2012 budget cut guarantees from Democrats before they agree to raise the debt ceiling by $2 trillion. This is not a wise battlefield and the market will get very nervous if this is not resolved this week. Next Monday, we will officially run out of money. The threat of a temporary default (even a few days) will topple this market.

China is slamming on the breaks and we are likely to see contraction in coming months. China has raised rates and reserve requirements many times this year. They are also considering other measures such as capital gains taxes and a Yuan revaluation. When their economy slows down it will send a shockwave around the world. This could generate selling pressure for many months.

Oil prices will stay elevated and I believe they will rebound this week. Libya is in for a long war and that will disrupt supplies. Nigerian elections were postponed and the unrest is growing in that oil producing nation. Food and energy prices have remained high for a prolonged period of time and they will start to impact consumption.

This week we will get the CPI and PPI. So far, the market has been able to shrug off the news. Core prices remain stable and the Fed is not worried about inflation.

The earnings this week will be dominated by retailers. High-end stores have performed well. Discounters are starting to feel the pinch from higher gasoline prices. Electronics sales have been soft according to MasterCard. Good news is priced in and I don’t believe these earnings releases will have much of an overall impact on the market since the results will be mixed.

All eyes will be on the debt ceiling. If it does not get raised, brace yourself. Politicians will play “chicken” until they see a huge market decline. Once that happens, they will move quickly.

As long as the debt ceiling is not raised and as long as the SPY stays below 135, I am very comfortable owning puts. I am not taking huge positions because and increase in the debt ceiling would result in a huge overnight rally. I’m betting that Republicans will play “hardball” and they won’t act until the market declines. They had to rollover for the 2011 budget because they were not in office long enough to have an impact (we were more than half way through the fiscal 2011). The “Tea Party” was not happy with this result and newly elected politicians want to prove they were worthy of the votes. The 2012 budget has become a fierce battleground.

There are lots of dark clouds. Stay on the sidelines or consider owning some puts. 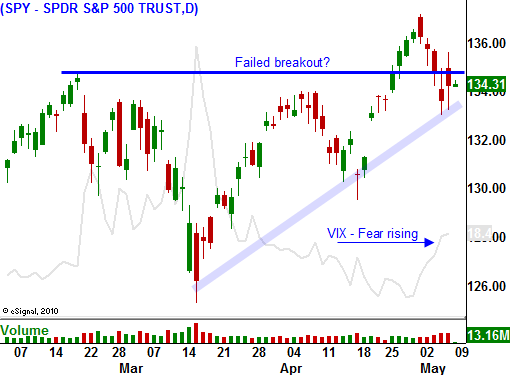