Don’t Get Fooled By This Rally – Danger Looms. Stay Short Below SPY 135.

Yesterday, the market rebounded when rumors of a Greek departure from the EU were dispelled. Traders monitored the news over the weekend and decided that Friday’s jobs number was too strong to ignore. Today, stocks are continuing to push higher and they have temporarily rallied above resistance at SPY 135.

The price action feels encouraging, but danger lurks and I still believe the upside is very limited. There are a few looming issues that will weigh on the market and one of them could generate a sharp decline in the next week.

Republicans and Democrats are waging a battle over the 2012 budget and they are holding the debt ceiling hostage. Majority Leader Boehner said that Congress should be cutting spending by more than the debt ceiling increase. “They need to be thinking in terms of trillions, not billions.” He also said that specific cuts should accompany any debt ceiling deal. This type of rhetoric tells me that it won’t get raised until the market forces politicians to act. Nothing will get their attention quicker than a big market selloff.

The Treasury Secretary says that he could stretch funds out to August, but the market won’t wait that long. May 16th, we will hit the debt ceiling and technically our government will default. I believe investors will get nervous and a market decline will send a warning signal to Washington in the next week.

Last week’s Unemployment Report contradicts the ADP report and weekly initial claims data. The market trades off of the government’s numbers, but I don’t trust them. Last week, ISM manufacturing and ISM services declined. These releases were also consistent with slower labor growth.

This morning, China released a higher trade surplus number. Exports were in line, but imports fell more than expected. This might have been caused by a 12% decline in imports from Japan after the earthquake. Lower imports could also be a sign of contraction. China has progressively tightened this year and officials have stated that they will continue to do so. BHP (the world’s largest miner) said that it sees the potential for an economic slowdown in the months ahead. China is their biggest customer and any signs of contraction will impact global markets.

Greece is in trouble and it would be foolish for them to pull out of the EU. This country is fiscally irresponsible and it would instantly default on its loans. A second rumor has circulated that Greece needs an additional €60 billion by the end of 2013. This is not surprising since they have done nothing to control costs. This is a bucket with a giant hole in it.

Portugal received €73 billion in aid, but it believes it will need another €27 billion to stay afloat. They don’t want to rein in expenses either and last month they voted against austerity. Their Prime Minister resigned when he could not sway politicians to cut spending.

Strong members are getting anxious. Now Ireland wants the interest rate lowered on its aid. The EU might consider that if Ireland raises corporate tax rates. Again, there is conflict. The strength of the EU will be challenged in coming years. This will be an ongoing saga and the market impact of a euro credit crisis will oscillate.

The end of earnings season typically results in a pullback and the old adage “sell in May and go away” will generate selling pressure. Stocks have had a nice run and Asset Managers will lock in profits. The uncertainty surrounding the debt ceiling will keep a lid on this market. I doubt it will challenge the highs of the year.

The momentum has been strong and in the absence of negative news, stocks will try to float higher. However, if the banter between Republicans and Democrats continues, a significant one-day decline could be right around the corner. The father apart both parties appear, the greater the chance for a decline. The threat of a temporary default could be devastating for the market. 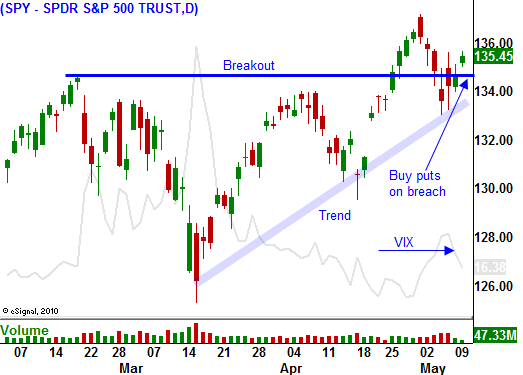