Last week, the market started to show some signs of weakness. Economic releases where “softer” than expected and traders were preparing for a dismal Unemployment Report on Friday. The SPY had broken below support at 135 and the table was set for a quick pullback.

Contrary to the ADP employment report and weeks of rising initial jobless claims, the government’s calculations showed that job growth in April was robust. The market rocketed on the news. As the day progressed, rumors circulated that Greece was about to pull out of the EU. The market gave back all of its gains Friday and traders reduced risk heading into the weekend.

Monday, the market staged a relief rally when it was clear that Greece had no intentions of leaving the EU. This would be insane since the country would immediately default. The market’s reaction on Friday shows that the tension between EU members is high. Weak countries continue to spend and strong countries are reluctant to lend money until they see structural reform.

Finland was close to rejecting Portugal’s bailout and England said that it will not contribute to bailouts after 2012. PIIGS nations know that they could spark a credit crisis in Europe if they default and they are using that as leverage. This is making the rift in the EU even wider.

This story will continue to unfold over the next few years. Each episode will carry more weight since the stakes will be higher. Countries are not addressing structural problems (pensions and healthcare) and the budget deficits will continue to escalate.

For now, the level of fear is elevated, but I don’t see imminent danger. Greece may privatize some of its assets and those proceeds will be used to back €60 billion worth of loans from the IMF. That is what the country needs to get through 2013. Portugal has secured €73 billion in aid, but might need another €27 billion to meet its obligations. The terms of the loan are still being determined and will see how Portugal reacts. Spain is the 800 pound gorilla and as long as China supports its bond auctions, Euro credit fears will be kept in check.

This morning, China’s CPI came in a little hotter than expected. Retail sales and industrial production missed estimates and their market was down. China has progressively tightened this year and I do not believe they are finished. Any slowdown in their economy will impact global markets and this is the biggest threat for stocks this summer.

On a short-term basis, our market faces an immediate challenge. If the debt ceiling is not raised this week our government will technically default next week. Republicans are squeezing Democrats for 2012 budget cut guarantees and they are holding the debt ceiling hostage. This is a dangerous tactic and the threat of a temporary default will topple this market. Both sides are distant and a quick resolution seems unlikely.

For this reason, I believe any rally will be very limited. Asset Managers will not chase stocks in this environment. In fact, they are likely to take profits. A big, swift decline will flush bullish speculators out and it will send a clear message to Washington. The Treasury Secretary said that he can stretch funds out to August and we may or may not see a huge decline immediately. Without question, the probability of a sell off increases every day the debt ceiling is not raised.

As long as the market stays above SPY 135, stay in cash. When that level is breached, buy puts. The price action today is weak and I believe the selling pressure will increase late in the day. 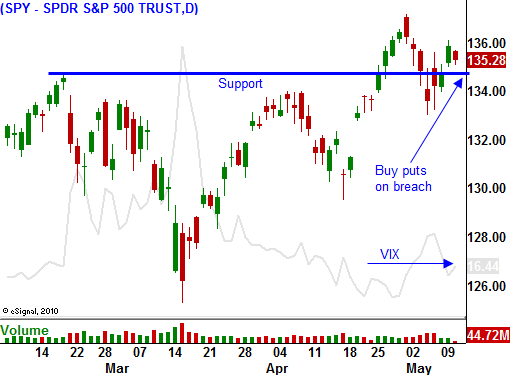