Last week, bulls and bears engaged for battle. ISM manufacturing, ISM services, ADP employment and initial jobless claims were all “lighter” than expected and that set a negative tone for Friday’s Unemployment Report. Surprisingly, the government’s statistics contradicted all of the other data points and the market rebounded from earlier selling. This has also been a choppy week of trading, but the bears have gained control.

There are many storm clouds on the horizon, but none is more pressing than the debt ceiling. In less than a week, the US will technically default. Republicans are holding the debt ceiling hostage and they want 2012 budget cut guarantees before they agree to a $2 trillion increase. Both parties are distant and they will continue to play “chicken” until the market forces them to take action. Nothing gets Washington’s attention quicker than a massive market decline.

The Treasury Secretary said that funds could be stretched out to August, but it means states will not get federal funding. Stocks may or may not tank in the next week, but it is safe to say that risk levels are elevated. Asset Managers will not chase stocks until this is resolved. In fact, they may take profits after a nice eight-month 35% rally. This selling will flush out bullish speculators and the decline will be swift. Every day that the debt ceiling is not raised, the probability of a market decline increases.

Soft economic releases will also start to impact the market. I don’t trust the government’s labor number and I believe traders are questioning it as well. This morning, the PPI rose .8% (hotter than expected) and the core was up .3% (higher than expected). If not for the recent decline in commodity prices, this number could have weighed on the market. Initial jobless claims came in at 438,000 and that is a relatively high number. Retail sales rose .5%, but when you strip out gas and autos, it was only up .2% (keeping pace with inflation). These are not strong economic releases.

As I been mentioning, a longer-term threat has emerged and I now believe it is likely to occur. China has been slamming on the brakes this year. The frequency and the magnitude of their actions suggest that they are nowhere near finished. They have raised interest rates and bank reserve requirements four times this year. They are also considering a Yuan revaluation (+10%) and capital gains taxes. Last night, they raised bank reserve requirements by 50 basis points. This surprised many analysts.

Two days ago, China reported a trade surplus. On the surface, the number looked good. Exports were in line, but imports fell dramatically. Part of that was caused by the earthquake in Japan, but part of it resulted from softer demand and manufacturers are cutting back on materials. China’s economy will contract and they are taking drastic action to fend off inflation. This is no longer a matter of if; it is a matter of when. The world is counting on China to pull us out of this recession and when their economic activity declines, it will impact global markets. I believe we will start seeing signs of economic contraction this summer.

The credit crisis in Europe will fester. Greece, Portugal and Ireland are all negotiated for better terms and stronger nations are becoming more reluctant to fund bailouts. Without going into great detail, this problem will grow, but it will not topple the market – yet. China has agreed to support Spain’s bond auctions and that will contain fear. If Spain’s interest rates start to climb, a euro credit crisis will be close at hand. It is too big to fail and too big to bail. There will be squabbles within the EU this year and they will temporarily rattle the market, but I don’t believe a crisis will unfold in 2011.

Earnings are winding down and stocks typically retreat towards the end of the cycle. Last night, Cisco provided weak guidance and tech stocks are declining this morning. This company has been struggling and I don’t believe the news will have much of a negative impact on the market. Retailers are also posting results. They have been decent and they will more than offset CSCO.

The biggest obstacles for the market next week are the debt ceiling, a meeting between Eurozone finance ministers, the FOMC minutes and the new government in Finland. The threat of a temporary default will weigh on the market. EU officials will try to define bailout policies and arguments will erupt. Rumor has it that FOMC officials are more hawkish than the Chairman and that will come out in the minutes. Finland has been opposed to Portugal’s bailout and we might hear statements about Finland stance on future bailouts. All of these events have the potential to disappoint the market.

The SPY is below 135, buy puts. I believe we could easily test 130 next week. In coming weeks, we will test 125 if the debt ceiling is not raised. If China’s economy will show signs of strain and the market will struggle this summer. Focus on stocks that are near the top of the Live Update table in the bearish section. Financials are my favorite shorts and they will get hammered if the debt ceiling is not raised. 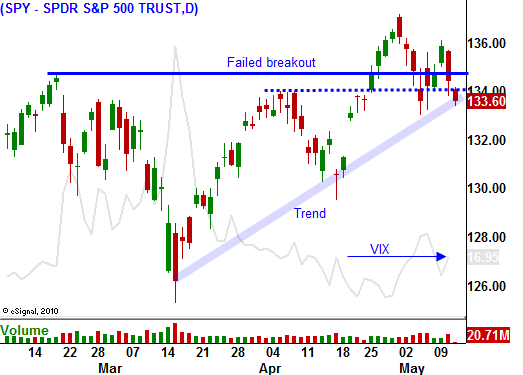