The 8 Month Market Rally Will Be Hard To Turn. Own Puts If SPY Closes Below 135.

Yesterday, the market was able to post a nice rally and finish right at the pivotal SPY 135 level. Economic releases are showing signs of strain and we will hit the debt ceiling next week. With each passing day, the probability of a swift decline increases.

Republicans want 2012 budget cut guarantees before they agree to raise the debt ceiling. This is a dangerous maneuver and the threat of even a temporary default will spook investors. For this reason, I believe any market rally will be contained. The U.S. Treasury can stretch funds out for a couple of months, but the market won’t wait that long.

The debt ceiling can be fixed quickly but there is a longer-term issue that could weigh on the market. China is slamming on the brakes with both feet and yesterday they raised bank reserve requirements for the fifth time this year. They are committed slowing growth. Any economic contraction in China will be felt around the world.

Hong Kong’s GDP rose 7.2% in the first quarter and growth is still strong in Asia. Germany and France reported GDP growth of 1.5% and 1% respectively overnight. That was better than expected and stocks in Asia and Europe are trading higher. That has created a small bid to our market and it looks like we will start the day off on a positive note.

Credit concerns in Europe are real, but they can fester for many months before they reach a crisis level. EU finance ministers will meet next week to define bailout policies. The rhetoric will be heated and they are not likely to reach an agreement. As long as Spain’s bond auctions go well, the fear of a credit crisis will be low. China has already committed to buying that debt and Spain’s interest rates are stable.

Economic releases in the US are showing signs of strain. Initial jobless claims continue to climb and the four-week moving average is moving higher. ISM manufacturing, ISM services, and retail sales were all soft. Yesterday, the PPI came in higher than expected at .8%. The recent selloff in commodities kept future inflation worries at bay. This morning, we will get the CPI. The market does not seem overly concerned with inflation. However, higher gasoline prices are starting to bite into consumption.

The economic releases are light next week. The FOMC minutes will be released and they may reveal that Fed officials are more hawkish.

Earnings season has ended and the news was good. Corporate profits were up 25% year-over-year and the S&P 500 is trading at a forward P/E of 13. Stock valuations are cheap and this eight-month rally will be difficult to turn. There are dark clouds on the horizon, but the market has been very resilient.

I am not taking any large positions. The market risk is high as long as the debt ceiling is not raised. At any moment, stocks could tank. If the SPY closes below 135, I will hang on to my puts. I will only add to positions if the momentum builds. If the market is above SPY 135, I will sell my puts and stay in cash.

Over the next month, I believe economic conditions will soften in the US and China. That will create longer-term selling pressure as opposed to an event driven decline. Keep your positions small during this transition and wait for a bona fide breakdown with follow through. 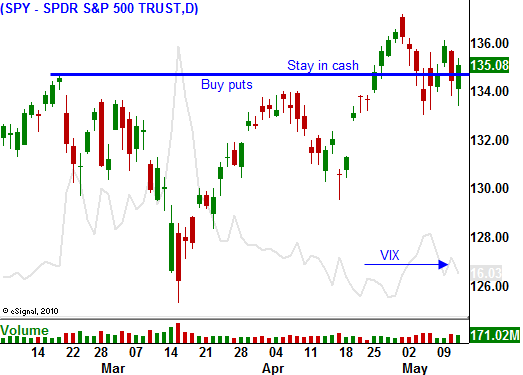