The Market Has Lost Its Momentum – Downside Could Be Tested This Week.

In the last two years, the market has doubled in price. The momentum has been particularly strong during the last eight months and stocks have moved up 35%. Earnings in Q1 increased 25% year-over-year and the S&P 500 is trading at a forward P/E of 13. This rally will be very hard to turn. In the last two weeks, the momentum has stalled and the SPY closed below support at 135.

There are storm clouds on the horizon, but I am not expecting a massive decline. We are likely to see profit-taking and bullish speculators will get flushed out of positions in the next two months.

The biggest threat to the market is a credit crisis. Japan has been flying under the radar and they are in dangerous territory. The earth quake has pushed them closer to the edge, but as long as Japanese citizens continue to buy bonds, the problem will continue to go unnoticed. PIIGS countries are squealing at the bailout terms and stronger members are growing more reluctant to finance their deficits. The head of the IMF was arrested in New York last night on rape charges. This was an important week for bailout negotiations and they will continue without him. As long as China continues to buy Spain’s bonds, euro credit concerns will not escalate. In the US, we will hit the debt ceiling today. This is a dangerous, but temporary condition.

Republicans are holding the debt ceiling hostage. They want 2012 budget cut guarantees from Democrats before they raise the ceiling by $2 trillion. The Treasury can stretch funds out to August so that we don’t actually default. However, the market will grow more and more anxious with each passing day. Both parties are distant and unalarmed by the time bomb. I don’t know when the market will hit the panic button, but a swift, deep decline will force politicians to take action.

Apart from a credit crisis, a slowdown in China is the only other real threat to the market. They have been slamming on the brakes and we will see contraction. The tightening has been fast and furious. Last week, they raised bank reserve requirements for the fifth time this year. The entire world is counting on China to pull us out of this recession and any decline in economic activity will impact global markets. For now, we don’t know when they will stop tightening and we can’t gauge the magnitude of the pullback.

Economic conditions in the US have been softening in recent weeks. ISM manufacturing and ISM services declined from high levels last month. ADP employment came in lighter than expected and initial jobless claims have been increasing steadily. Home prices fell 3% in the first quarter (the biggest decline since 2008) and 27% of all homes have negative equity. Retail sales barely kept pace with inflation and consumers are cutting back because of high food and energy costs.

The market will have issues to work through this summer, but I am not looking for a massive decline of 25% or more. We are likely to pullback 10 to 15% and trade in a range this summer. Stocks will consolidate and they will gather steam for a rally this fall. As long as economic conditions are stable and earnings are strong, money will flow into the market.

The third-year of a Presidential term is historically bullish. Obama wants to increase domestic oil production and the government is taking bids for Alaskan oil leases. He knows that jobs and energy prices are critical to getting reelected. He also wants to impose a flat tax on corporations. This will appear to be a tax cut, but corporations will actually pay more in taxes because loopholes will be closed. The Fed has stated that they don’t want to raise interest rates and a closer we get to 2012; the less likely we are to see rate hikes. The Fed does not want to be blamed for influencing an election.

The price action is soft and the dark clouds will keep a lid on this market. Option premiums are cheap and I am long puts. My exposure is light and I do not want to place big bets at this juncture. If China’s economy slows down or Spain’s interest rates start to climb, I will add put positions.

The earnings this week will be dominated by retailers. Most of the good news is factored in and I am not expecting much of a market influence. The economic releases are also light. There are rumblings that the FOMC minutes could show that officials are more hawkish than the FOMC statement a few weeks ago suggested. This could be the biggest release of the week and if the rumors are true, it would be bearish.

As long as the SPY is below 135, hold put positions, but don’t go wild. The debt ceiling could spark a decline this week or it could happen in a few weeks. We don’t know when the panic button will get hit.

The market opened unchanged. Look for the downside to get tested this week. Asset Managers won’t chase stocks in this environment and bears will want to test the bid to the market. If buyers don’t step in, stocks will drift lower. 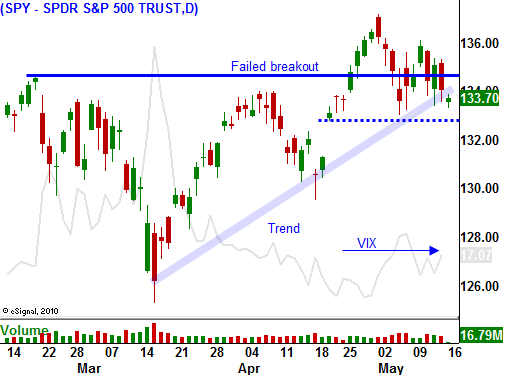