Bearish Pattern Starting To Emerge. SPY 130 Could Be Tested This Week

As I mentioned yesterday, the upward market momentum has stalled. That does not necessarily mean that we are headed for disaster. Q1 earnings were fantastic and stock valuations are cheap. This two-year rally will die hard and a prolonged market decline will only result if a credit crisis emerges or if China’s economy contracts.

The IMF is trying to negotiate bailouts with Portugal and Greece. Strauss Kahn’s rape charges were untimely, but the process will continue without him. Portugal secured a €78 billion bailout and Greece is considering a soft restructuring (extend current maturities) so that it can secure additional financing. It is also considering asset sales. In coming months, the rhetoric between strong and weak EU members will escalate.

Finland has a new government and it wants to attach conditions to Portugal’s aid. Germany’s Prime Minister is losing popularity and voter opposition to the bailouts is growing.

China has stated that it will support Spain’s bond auctions. This is critical since it represents 12% of the EU’s GDP. It has massive debt levels and 20% unemployment. Now that Portugal has received aid, the market will quickly shift its attention to the next weak link. Spain is too big to bail and too big to fail. Yesterday’s 12 and 18-month bond auctions went well and yields declined. As long as Spain’s interest rates are stable, euro credit concerns will be subdued.

A slowdown in China is likely. They have aggressively tightened this year and they are not done. Inflation is a major threat and they are desperately trying to get ahead of the curve. Given their actions so far this year, the risk of over tightening exists. Last week, they reported that imports were much lower than expected. This news was discounted due to the impact of Japan’s earthquake. I believe manufactures might be cutting back because of softer demand.

China is reporting massive power outages and that will impact industrial production west of Shanghai. Authorities are warning that power rationing might be needed during peak summer months. A severe drought is also reduced hydroelectric output. This morning, Hewlett-Packard said that Japan’s earthquake will impact earnings during the second half of 2011. I have been mentioning that this disaster will take time to filter through supply chains. These events combined with aggressive tightening could spark a dramatic economic contraction in China. The entire world is counting on them to pull us out of a recession and any signs of a slowdown will impact global markets.

Today, Industrial Production in the US was flat and that was worse than expected. That is just another weak economic release (ISM services, ISM manufacturing, ADP employment and initial claims) and it brings the strong Unemployment Report into question. I did not believe the government’s labor release when it came out because it contradicted all other jobs data.

The debt ceiling may not cause panic selling right away, but with each passing day it will carry more weight. Both parties are playing “chicken” with the debt ceiling and this uncertainty will spark fear even if an actual default is a couple of months away.

The last two days, the market has opened on its high and closed on its low. It is too early to call that a pattern, but today’s price action suggests similar. Stocks are weak and decliners outnumber advancers by 3:1. Look for continued selling and a test of SPY 130 this week. Option expiration sell programs could kick in and bullish speculators will get flushed out.

I am long puts and happy. I am tempted to add to position. Industrials and tech look weak. 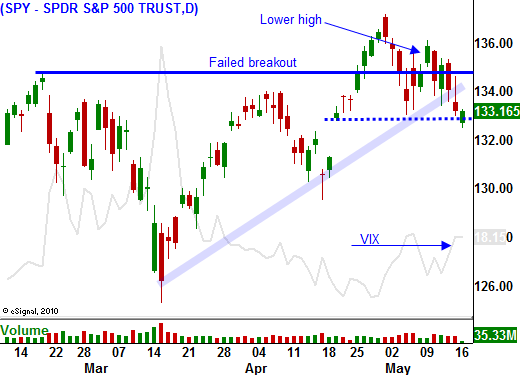