Look For Choppy Trading In A Tight Range Through Memorial Day

In the last two weeks, the market has bounced between SPY 132 and 135. The momentum has stalled and traders are searching for the next catalyst. There are bullish and bearish forces behind these moves and we are likely to stay in this trading range through Memorial Day.

On the bullish side of the ledger, stocks are cheap. Profits were up 25% year-over-year and the S&P 500 is trading at a forward P/E of 13. Interest rates are at historical lows and equities are attractive. The two-year uptrend has been accentuated by a 35% rally in the last eight months. This move will be difficult to turn and it will only happen if macro conditions change.

The most likely change will come from China. They have been slamming on the brakes and their actions suggest more tightening. The world is counting on China to pull us out of this recession and any economic contraction will result in a prolonged market decline. Imports in April fell and manufactures might be cutting back on supplies. China has massive power outages and it is rationing electricity. This will impact manufacturing. This week, Hewlett-Packard said that the earthquake in Japan will reduce earnings for the rest of 2011. All of these events signal trouble ahead. In two weeks, China will release its PMI and I believe it will miss expectations.

As we know from 2 years ago, a credit crisis would be devastating for the market. Europe is scrambling to nail down bailout policies but they can’t reach an agreement. Greece, Ireland and Portugal are relatively small and the problem can be managed. However, Spain has been moved to the front burner and this is where the battle line must be drawn. It is too big to bail and too big to fail. For the time being, China is buying their bonds and yesterday’s 10-year and 30-year auctions went well. As long as Spain’s interest rates are stable, Euro credit concerns will not escalate. This can change at any moment, but I don’t see this as a threat this summer.

Two days ago, the US hit its debt ceiling. The Treasury Department said that it can stretch funds out to August, so the market did not take the event seriously. Republicans feel that they can hold the debt ceiling hostage, but they have no leverage to secure 2012 budget cut guarantees. This maneuver reminds me of the child who threatens his parents by holding his breath. Democrats know that Republicans don’t want to be blamed for the next credit crisis. As soon as the market tanks, they will agree to raise the debt ceiling by $2 trillion. The longer this game of “chicken” lasts, the greater the probability of a sharp decline.

Yesterday, the FOMC minutes revealed that the Fed might be a little more dovish than analysts expected. The market rallied after the news and the buying has spilled over into today’s session. Stocks are also moving higher after a better-than-expected initial jobless claims number. Last week, 409,000 new applications were filed and that was 10,000 less than the consensus estimate. The four-week moving average for initial jobless claims is still moving higher and this could present a problem when May’s labor statistics are released in a couple of weeks. In general, economic releases the last few weeks have been soft.

Asset Managers are not going to chase stocks in this environment. That means resistance at the highs of the year will hold. By the same token, valuations are attractive and as long as macro conditions remain intact, they will buy stocks on a pullback. From a trading perspective, we can expect a trading range for at least a couple of weeks.

Earnings season has ended and major economic releases are still two weeks away. With a holiday approaching, the price action should be lackluster next week. I have trimmed my put positions and my risk exposure is minimal. As long as the SPY is below 135, I will hang on to them. We don’t know when the market will react to the debt ceiling and I want to hang on to these bearish bets as long as possible.

Option implied volatilities are low, but they are likely to move even lower in the next week. The market is stable and Market Makers will sell premium ahead of the holiday. This will set up a nice put buying opportunity before China releases its PMI on June 1st.

Look for quiet, choppy trading between SPY 133 – 135 for the next week. Keep your size small and consider playing a round of golf. 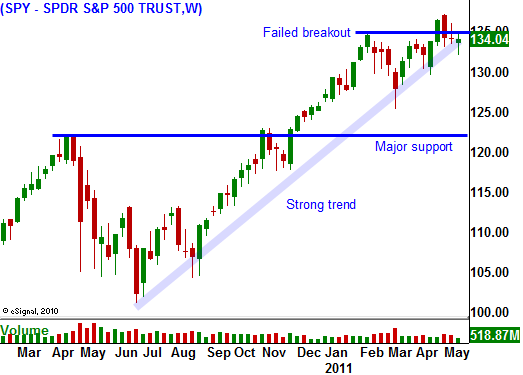