Choppy Trading During On Light News. Buy Puts Late Next Week If SPY Is Below 135

As I mentioned yesterday, the market will chop back and forth during the next week. We had a nice rally Tuesday and Wednesday and now those gains are being erased. With the Memorial Day holiday approaching, trading will be light and directionless next week. This is a good time to keep your size small.

Earnings season has ended and the results were excellent. Stocks are trading at a forward P/E of 13 and with interest rates at historic lows, equities are attractively valued. The two-year uptrend will be hard to reverse and macro conditions need to change for that to happen.

The Euro credit crisis will continue to fester, but it won’t manifest as long as China is buying Spain’s debt. Spain will hold elections this weekend and hopefully the new regime will stick to austerity programs. Their bond auctions went well this week. Greece, Ireland and Portugal are under wing and the banter between strong and weak nations will continue. The EU will not be able to reach an agreement on bailout policies, but that threat of a credit crisis is minimal as long as Spain’s interest rates are stable.

China’s economy will contract; it’s just a matter of when. They have been progressively tightening this year and their actions suggest that another interest rate hike is around the corner. China has a severe power shortage and electricity is being rationed. The impact of Japan’s earthquake has not been felt yet, but we are likely to see that in the next few weeks. Hewlett-Packard said that earnings in the second half of 2011 will be impacted by Japan’s disaster. These two factors could blindside China and their economy could contract more than expected. Sunday evening, the flash PMI will be released by HSBC. This preliminary number could spook investors, but the official release isn’t until June 1st.

An economic decline in China is the biggest market threat. The entire world is counting on them to pull us out of this recession. They are relentlessly tightening and they intended to get ahead of inflation.

The debt ceiling in the US must be raised. Every passing day that this goes unresolved, the probability of a big market decline increases. Republicans think they have leverage, but they do not. When the market falls apart on default worries, their hand will be forced and they will increase the debt ceiling by $2 trillion.

Asset Managers will not chase stocks in this environment. That means we are not likely to see new highs. From a trading perspective, I like owning puts. I believe the upside for this market is limited and you never know when the market might decide to sell off because of the debt ceiling. We could also start seeing signs of a slowdown in China. Without question, this would spook investors.

The news next week is fairly light. Analysts expect Q1 GDP to be revised upward from 1.8% to 2.2%. This should not have a major market impact. Durable goods orders are always volatile and they are taken with a grain of salt. There are some PMI releases from Europe, but they are not major market drivers.

Look for choppy trading in a relatively tight range between SPY 132 and 136. Major economic releases will hit the market in two weeks and I believe the chances for disappointment are high. As long as the SPY is trading below 135, I am hanging on to my put positions. I am not taking large bets at this time, but I will add to those positions later next week if we get a nice rally. 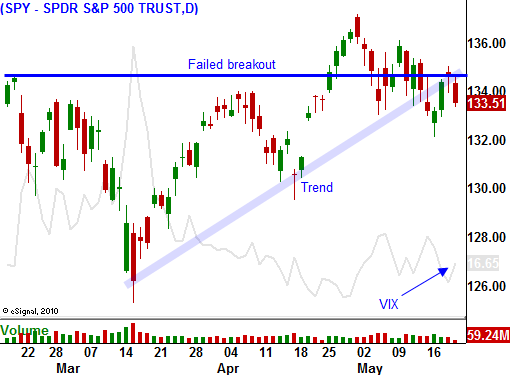