Europe Getting The Attention – China Could Be A More Immediate Concern

This morning, the S&P 500 fell 12 points on the open and after two hours of trading, we are at a standstill. The price action during the final 30 minutes of trading last Friday was very weak. Initially, I thought it might be expiration related, but given this morning’s decline, it could be something more.

As I have been mentioning, there are two events that could spoil this rally. One is a credit crisis in Europe and the other is a slowdown in China.

Over the weekend, Standard & Poor’s lowered its debt rating for Italy. They cited slow growth and an inability to address structural problems. Spain is also on everyone’s radar and incumbents are losing elections. As credit concerns spread to larger countries, the threat of a meltdown grows. Strong nations are already reluctant to lend money to weaker nations even though the amounts are relatively small.

Greece has many financial problems, but it has also fallen way behind on its medical payments to health-care companies. A national healthcare program only works if the government has money to pay for the services. Eventually, doctors will only work for cash. The US has $15 trillion in national debt and we can’t afford to provide it to 30 million people. It sounds like a noble cause, but it will bankrupt us. More than 60% of all physicians in the US won’t accept Medicare because the government is slow to pay its bills.

The credit crisis in Europe will fester, but I do not believe it will be a huge problem in 2011. China is still supporting bond auctions and as long as interest rates in Spain/Italy remained stable, fear will be contained. We will see occasional declines and the ECB/IMF will restore confidence. Within the next couple of years, a credit crisis in Europe could lead to a major market decline and it will make the 2008 financial crisis look like a cakewalk.

China released its flash PMI and it dropped to 51.1 from 51.8. That was weaker than expected and their market fell 3%. China has been relentless in its tightening measures this year and it might have gone too far. The earth quake in Japan and massive power outages across China could severely impact production. I believe the combination of these events will lead to economic contraction and we might start seeing that weakness in upcoming economic releases. If China’s economy softens, global markets will decline. It has been the key to this global recovery.

Earnings season is over and the economic releases this week (GDP, durable goods and initial claims) are not major market movers. Ahead of a holiday, I’m expecting trading activity to decline.

The SPY is below the low from last week and it is making a new 4-week low. The 50-Day MA of 132.60 has been breached and we could see a pullback to support at SPY 130 this week.

As long as the SPY is below $135, I like owning puts. I don’t have large positions because I still feel the market will chop around this week. If I see selling pressure into the close on a consistent basis, I will add to positions Thursday and Friday. I believe China’s PMI and the labor reports next week will disappoint.

Stocks look poised to move lower into the close today. 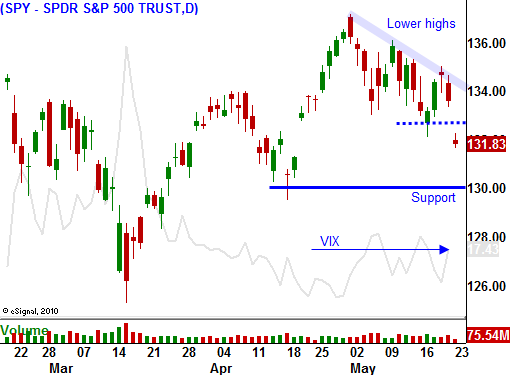