Since the beginning of May, the market has been making a series of lower highs. Without question, the upward momentum has stalled. Earnings season has ended and the results were fantastic. Now the focus has shifted to dark clouds on the horizon.

During the last 30 minutes of trading on expiration Friday, stocks dropped into the closing bell. At first glance, it seemed like an order imbalance, but perhaps it was something more. When trading resumed yesterday, the S&P 500 opened 12 points lower. Stocks declined slightly throughout the day and the price action was lackluster.

The trading volume will be relatively light the rest of the week ahead of the holiday. Major economic releases are slated next week and traders will not take large positions ahead of the news.

GDP, durable goods orders and initial claims will not have a major impact on the market this week. Analysts are projecting a slight increase in GDP from 1.8% to 2.2%. Durable goods orders are volatile from month to month and the number rarely produces a sustained move. Initial claims have been above 400,000 and that could be problematic for next week’s labor statistics.

Jobless claims data is derived from state unemployment applications each week and it is the timeliest economic release. It varies week to week, but the four-week moving average is an accurate barometer of labor trends. ADP processes payrolls for small and medium-sized businesses. It has its finger on the pulse of the private sector. Last month, both data points contradicted the government’s Unemployment Report and they showed slower job growth. I believe next week’s labor numbers could be revised lower and the report could disappoint.

Reuters projects that state and local governments could lay off 450,000 people in 2012. That is 50% higher than what is projected for 2011. States will be $450 billion in the hole by the end of the year and a UBS analyst predicts they will be $600 billion in debt by the end of 2012. Federal stimulus programs will end and health care costs will continue to rise.

Global growth is dependent on China, the second largest economy. This year, they have progressively tightened and they are committed to fending off inflation. These actions will result in a contraction and I suspect they have overcompensated. The earthquake in Japan and massive power outages in China have impacted production. Combined, these forces could immediately reduce activity. Yesterday, HSBC released a “flash reading” of China’s PMI and it declined 51.1 from 51.8. That was a bigger decline than analysts expected and China’s market dropped 3%. The official number will be released June 1st and it could be a warning sign. China’s economic growth will slow down and I believe this soft patch will pressure stocks this summer.

Standard & Poor’s lowered Italy’s debt rating yesterday. They cited slow growth and an inability to address structural problems as the reason. Greece said that it will default without additional aid from the EU and is considering extending its bond maturities. This means investors have to wait longer to get their money back. They are also considering asset sales. The government is way behind on healthcare payments and insurers are hanging on by their fingernails.

Greece, Ireland and Portugal are the tip of the iceberg. The credit crisis will spread like cancer and when it hits Spain/Italy, investors will hit the panic button. I don’t see that happening this year. China and other money centers will fight to keep them afloat and this could drag on for another year or two.

The US, Europe and Japan are all deeply indebted. Once the credit crisis starts, it will spread quickly. The focus is on PIIGS countries, but a crisis could start at the state level here in the US as Meredith Whitney has predicted. It’s also possible that the earthquake has pushed Japan right to the edge and citizens alone will no longer be able to finance the country’s unbelievable debt. If Japan’s interest rates rise by just 1.25%, all of their tax receipts won’t cover their annual interest expense on their national debt. Talk about dire; they are living on the edge.

I mention the debt problems because they will manifest in the next few years. Some analysts don’t have the foresight to see that a global credit crisis is imminent. Some analysts don’t want to talk about it because they will be cast into the “lunatic fringe”. Some analysts believe it will happen, but they don’t want to alarm investors and ruin their asset management business as customers hit the exits. Some analysts are “gagged” by their Compliance Department. In any case, 95% of the investment community denies that a credit crisis will happen. I have no ax to grind; I just trade the market and tell it like it is.

For now, the market will trade off of fantastic earnings, attractive stock valuations, low bond yields, a “friendly” Fed and upward momentum. There will be an occasional snag that the market has to overcome. Right now, that snag is China and the debt ceiling. Prices should be soft this summer.

This fall, stocks will rally. The debt ceiling will be raised, the EU will agree on bailout policies and the new credit facility will crank up, Obama will play nice in the sandbox and he will appear to reach across the aisle ahead of 2012 elections. Troops will be withdrawn from Afghanistan and budget cuts will make it appear that deficits are heading in the right direction. The re-election campaign has started and the market should be in decent shape after a pullback this summer.

As we head into 2012, credit problems will become more challenging. I consider stocks to be “the house” and a beautiful house it is. Governments are the foundation. They provide a stable environment and the free flow of money. The foundation has massive cracks and in a matter of years, our beautiful house will crumble. The financial crisis of 2008-2009 is just a taste of what is to come.

In this quiet week of trading, I thought I would provide you with my longer term forecast. My comments and trading focus 3-4 weeks out, but I am always aware of the big picture.

Look for choppy trading this week and a test of SPY 130 next week. China’s PMI could be the real spoiler and negative adjustments to April’s Unemployment Report could force a breakdown next week. I am long puts and I would like to add at the end of the week. The VIX did not rise yesterday even though the market declined. Puts are still relatively cheap and they will get cheaper if the activity slows down in the next few days. 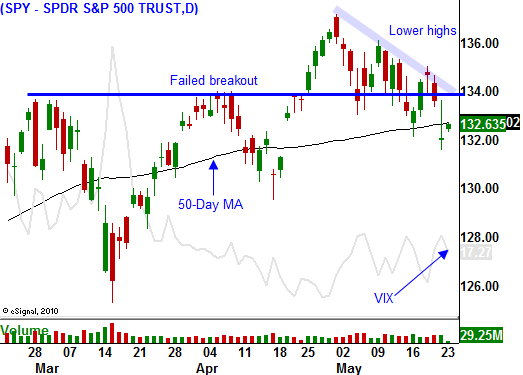