The last four trading days have been weak and the market is trading at a new low for the month. It is also below the 50-day moving average. Earnings season is over and traders are focusing on economic releases.

Monday, we learned that China’s economy is starting to slow. In a “flash release”, the PMI fell from 51.8 to 51.1. June 1st, the actual number will be released and it could disappoint the market. This “flash release” caused the market selloff on Monday.

China is keeping a lid on electricity prices and utility companies are not producing. Coal prices have surged and utilities don’t want to lose money. It’s projected that 20% of utility companies will go broke in the next year if this continues. This is just another example of how China subsidizes growth. A severe drought is also reduced hydroelectric power. Shortages plague the country and electricity is being rationed. This will impact production.

The earthquake in Japan will start to impact future economic statistics. China has been progressively tightening this year and the combination of all these events that lead to a sharp economic slowdown. Next Wednesday’s PMI could create selling pressure.

Subsides are leading to over-expansion. Instead of tightening, China should simply let prices fluctuate. They know this would lead to inflation and unrest. There is a rumor that China might increase gasoline prices by 10%. In emerging economies, food and energy comprise almost 40% of disposable income vs. less than 20% in the US. This would have an immediate impact on consumption.

Next Wednesday, ADP employment will be released. Last month, it came in below analysts’ estimates. Initial jobless claims have been increasing and that does not bode well for next week’s Unemployment Report.

This morning, durable goods orders fell 3.6% and that was worse than the 2% decline analysts were looking for. This number is very volatile (it was up 4.4% last month) and traders tend to discount it. GDP is expected to climb from 1.8% to 2% tomorrow. It won’t influence the market much.

Credit problems in Europe continue to fester. Standard & Poor’s downgraded Italy’s debt this week and a Chinese rating agency downgraded England’s debt. Greece may extend bond maturities for current bondholders (they will have to wait longer to get paid back) and that restructuring could create issues for credit default swaps (CDS). As long as the credit problem is contained the smaller nations, fear will be manageable. I monitor interest rates in Spain and Italy on a daily basis. If 10-year bond yields climb above 6.5% (currently 5.5%) a massive credit crisis will be less than a year away. We have not reached that point yet and I believe we will be safe through 2011.

Next week, the House will vote on a $2 trillion debt ceiling increase. It will not include any budget cut guarantees and it will not get passed. Republicans want to demonstrate that the debt ceiling will not get raised without budget cuts. In a US News & World Report article, Republican sources see debt ceiling negotiations extending into September. That is past the August 2nd deadline and we would be in default. This goes to show you how ignorant our politicians are. If the debt ceiling does not get raised before August 2, we will have a massive market meltdown. Republicans will be blamed for the crisis and they will cave in.

I’m all for budget cuts, but Republicans have picked the wrong battlefield. They do not have any leverage and this game of “chicken” could severely backfire in the 2012 elections. From a trading standpoint, I would love to see this unfold. I will load up on September out of the money puts and I will pivot into calls after the market hits a deep air pocket. The debt ceiling has been raised for decades and it will get raised again. Stocks will be cheap and I will pivot into calls because I am expecting a rally into the end of the third year of a Presidential term. Historically, this has been a great time to own stocks because the incumbent attempts to reach across the aisle.

For now, I see trouble ahead. I am long puts and I will add to my positions Friday and Tuesday. The market has a tendency to rally on light volume ahead of major holidays. The disappointing durable goods number this morning was quickly dismissed and stocks are trading higher.

Look for quiet trading and a decline in implied volatilities heading into the weekend. As long as the SPY stays below 135, I am comfortable owning puts. My positions are relatively small (20% allocation) and I will not add unless I see deteriorating economic conditions in China. That event would pressure stocks this summer and commodity stocks/heavy equipment/industrials would get hit hard.

Be patient. Add a few puts Friday and add Tuesday ahead of economic releases. 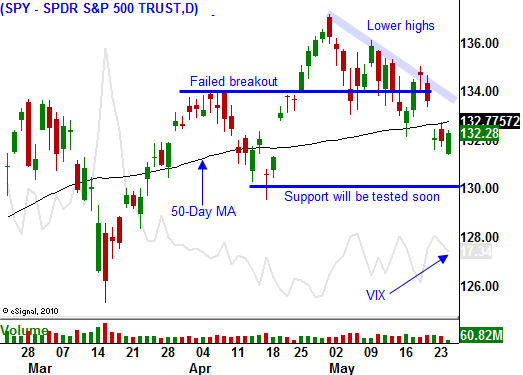