In the last week, stocks have moved lower and resistance is building. The focus has shifted from earnings to economics and there are signs of contraction. This is the calm before the storm and next week could be turbulent.

Domestically, economic releases have been deteriorating. This morning, GDP came in at 1.8% when analysts had been looking for 2%. Initial jobless claims from last week were higher than originally reported and states reported 424,000 new applications this week. Analysts were expecting claims to fall to 400,000 this week. Yesterday, durable goods orders fell more than expected and auto sales were to blame.

A slew of major economic releases are slated next week. ISM manufacturing and ISM services fell last month. Those numbers are likely to come in soft next week. Last month, the government’s Unemployment Report contradicted initial jobless claims and ADP employment. States report the number of new unemployment applications each week and this data is very timely. I have found the initial claims four-week moving average to be an accurate barometer for labor conditions. Furthermore, ADP processes payrolls for small and medium-sized businesses. They have their finger on the pulse of the jobs market. Consequently, I believe next week’s Unemployment Report will disappoint.

Internationally, economic conditions are also going to deteriorate. China is the key to this stubborn recovery and I sense a swift decline in activity lies ahead. Over tightening, power outages and the earthquake in Japan will result in contraction.

This year, China has raised interest rates four times and it has raised bank reserve requirements five times. It is also considering a capital gains tax and a 10% revaluation of the Yuan. The actions have been frequent and they are committed to fending off inflation. This leads me to believe that additional action will be taken.

Massive power outages across China have resulted in rationing. Citizens will be the first to receive electricity and manufacturers will have to stop production. The government has imposed price limits and utilities are losing money because input costs (coal) have increased. They are defying government demands to keep producing and under current conditions, 20% of the utilities could go out of business in the next year. A severe drought has also reduced hydroelectric output. This will have an immediate economic impact.

Analysts expected the earthquake in Japan to have an immediate economic impact. They did not see those signs in economic releases that followed shortly after the disaster and they did not see the impact in the early part of earnings season. This disaster will take time to flow through the economy. Last week, Hewlett-Packard and Juniper said that earnings in the second half of 2011 will be hampered by the earthquake. Imports in China fell last week because of supply disruptions in Japan.

I mention China’s issues because growth in this country is the cornerstone to global economic activity. Given all of these influences, their economy will contract and this event will pressure stocks throughout the summer. China’s stock market has declined 6 days in a row. Monday, a flash reading of their PMI was released and it fell from 51.8 to 51.1. The S&P 500 fell 15 points that day. The official number will be released next Wednesday and I believe it will spark a selloff.

That news will set a negative tone June 1st. A disappointing Unemployment Report and a dismal ISM services number will lead to another round of selling on Friday. The market will test support at SPY 130 and it is likely to fail.

The European credit crisis is hitting the headlines, but I don’t believe there is an immediate threat. China has stated that they will support bond auctions in Spain and Portugal. This will keep yields from rising and fear will be contained.

The debt ceiling is another issue. On August 3, we will officially default. The last time our country was faced with this problem we were in an economic expansion and unemployment was under 5%. Our national debt was 25% of its current level and the debt levels in Europe and Japan were manageable back then. That is not the case 15 years later and the market will have a very negative reaction this time around. With each passing day, this event will carry more and more weight. If the debt ceiling does not get raised before August, the market will tank.

There are plenty of red flags. The market tends to rally in quiet trading ahead of major holidays and this is the calm before the storm. I will be buying puts tomorrow and I will add to positions Tuesday. As long as the SPY stays below 135, I want to own puts. The Live Update table in the Daily Report will show you the best shorts. Just focus on the stocks that are consistently rising to the top of the bearish table. 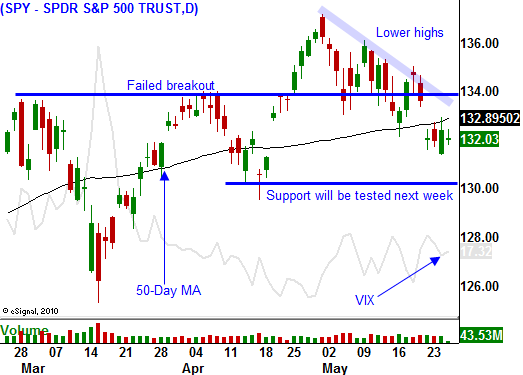