Yesterday, the market was able to recover some of its losses from earlier in the week. It is typical for stocks to rally into a major holiday weekend and the price action should be positive today. Light volume and lackluster price action will result in lower implied volatilities. That will set us up for a nice put buying opportunity.

Economic conditions here and abroad are starting to deteriorate. When we come back from holiday, traders will be inundated with major releases.

As I’ve been stating all week, China could be the source of market weakness this summer. It has aggressively tightened and their actions suggest additional steps will be taken. Even at this juncture, the possibility of over tightening exists. The earthquake in Japan is just starting to cycle through the economy and massive power outages will reduce manufacturing. China will release its PMI Tuesday evening. The flash reading earlier this week disappointed and I believe the official news will dampened spirits.

Wednesday, ADP employment and ISM manufacturing will be released. Last month, both numbers came in worse than expected. Employment conditions have been soft and initial jobless claims have been increasing the last two months. ISM manufacturing will be impacted by supply disruptions in Japan. A negative tone will be set by China’s PMI and if these releases miss expectations, the market will get nervous ahead of Friday’s Unemployment Report.

Last month, ADP and initial jobless claims contradicted the government’s labor calculations. I believe April’s employment number (244,000) will be revised lower and May’s number will be relatively weak. Initial jobless claims have been rising for almost 2 months and a trend has been established. After the open next Friday, ISM services will be released and it will be the icing on the cake. Almost 80% of our economic activity comes from the service sector. Last month, this release missed expectations by a wide margin.

As negative as this might sound, I am not looking for a massive market decline next week. We simply have a nice set up for support to be tested at SPY 130. Stocks are cheap and the market momentum for the last two years has been strong. This bull market will be tough to turn. Analysts will discount the weakness as an earthquake related “soft patch” that will quickly filter through the economy. It will take mounting evidence over a period of months to convince Asset Managers otherwise.

The debt ceiling and Euro credit concerns are also issues, but they don’t pose an immediate threat. Both are time bombs, but the fuse on the debt ceiling will burn for two months. The Euro crisis won’t be an issue in 2011.

If my forecast plays out, commodity stocks, and heavy equipment manufacturers will get hit the hardest. Obviously, Chinese stocks will also underperform. Their market has been down seven consecutive days and investors are nervous.

Don’t get overly aggressive with put purchases. Until we see technical support levels (SPY 130 and SPY 125) fall with ease, we have to temper our bearishness. The market should rally most of the day. Buy some puts near the close and add to positions Tuesday.

Please take time to honor the men and women who have given their lives to protect freedom around the world. 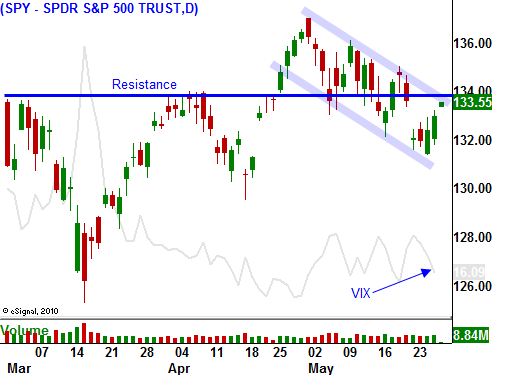