Last week, the market was able to rebound in light pre-holiday trading. It is typical for the market to float higher and for option implied volatilities to decline during these periods. Over the weekend, Germany decided not to press for debt restructuring in Greece and the market has responded positively to the news.

Greece will commit to selling €60 billion in assets to secure additional financing. They were quickly approaching the fifth tier infusion from the IMF and until certain conditions were met, they were not going to get much needed funding. On June 29, they would have defaulted without the loan. The EU has agreed to lend the money and this problem will temporarily be pacified. The first asset sale is scheduled for late in 2013 and it will raise approximately €15 billion. Stocks are rallying on the announcement, but I would hardly consider this good news.

Greece is so indebted that it needs to sell its assets. The underlying problem has not been addressed and retirement/healthcare benefits will continue to drain the country. Imagine if the United States decided to sell Alaska to cover his debt, but it did nothing to fix Social Security/Medicare/Medicaid. The credit crisis will continue to fester and rumor has it that Ireland and Portugal will need more money. The bottom line is that Spain’s interest rates have remained stable. As long as China keeps buying Spain’s debt, all of the current credit issues are small enough to get swept under the carpet.

In Asia, Japan’s PMI came in weak. Analysts quickly discounted the number and attributed the decline to the earthquake. Tonight, China will release its PMI and I believe it will be very weak.

The earthquake in Japan, massive power outages and aggressive tightening will take their toll this month. Last week, a flash reading was released and China’s economy contracted. The S&P 500 dropped 14 points on the news and that demonstrates how important China is to the global economy. Their market sold off seven straight days and today is bouncing from an oversold condition. After the release tonight, I am expecting the downtrend to continue.

China’s government has imposed price limits for electricity. Coal costs have skyrocketed and utilities were producing electricity at a loss. Against government mandates, they decided not to generate power. It is estimated that 20% of the utility companies will go broke if they are forced to produce. Residential needs get filled first and that means manufacturers have not been able to maintain production. Over the weekend, China finally raised electricity costs.

This is just another example of how China subsidizes growth. Manufacturers would not be able to produce at such low costs if the price of electricity had been allowed to rise. Now, manufacturing costs will rise and that is inflationary (good for US manufactures). This means residential electricity costs will rise and that could bite into consumption.

Many analysts suspect that China will raise rates next week during a national holiday. Their actions have been so aggressive that I believe another round of tightening is right around the corner. They are battling inflation and they know higher prices will cause civil unrest.

Major economic releases are scheduled in the US this week. Tomorrow, we will get ADP employment and ISM manufacturing. ADP processes payrolls for small and medium-sized businesses. Last month, the number disappointed, but it still showed growth. As long as private-sector jobs are being created, the market will be able to look past the number even if it comes in below expectations. ISM manufacturing declined slightly last month. I believe inventories were built up in anticipation of a decent economic recovery this year. Consumption has been soft, and production will be scaled back as inventories are not being depleted. Tomorrow’s number could be weak, but I am really looking for manufacturing decline next month.

This morning, Chicago PMI came in at 56.6, much weaker than the 62.5 consensus estimate.

The four-week moving average of initial jobless claims has been climbing for weeks. This is not a good trend and I believe Friday’s Unemployment Report will disappoint. Analysts are expecting 185,000 new jobs were created in May. April’s Unemployment Report also contradicted ADP and initial claims and I believe we will see a downward revision to last month’s number.
I am long puts and I am adding to positions today. The news from Europe was not good enough to justify this rally. The problems still exist and they will grow. After tonight, the focus will shift to deteriorating economic conditions. We will see a decline, but the first stages of this transition will be mild. Analysts will blame it on temporary conditions and they will claim that tightening in China is over. It will take back-to-back months of decline to raise the level of fear. When that happens, the market will break technical support with ease and we can get more aggressive with put purchases.
Buy some puts today and look for nervous trading the rest of the week. Financials, basic materials and heavy equipment manufacturers will be hit the hardest. If by chance I am wrong, a close above SPY 135 tomorrow is my stop. 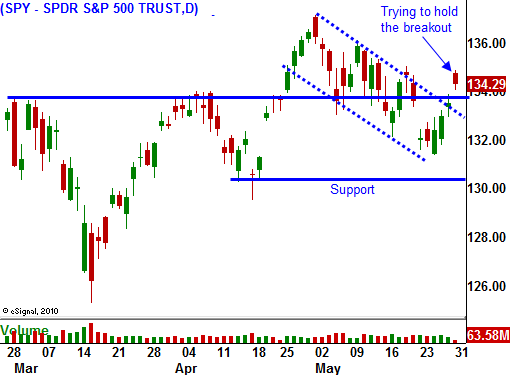