Yesterday, the market drifted higher after the holiday weekend. The volume was light and traders latched on to news that Greece would be able to secure much-needed funding before it defaults on June 29th. The S&P 500 jumped 6 points in the last few minutes of trading.

This morning, the puzzle pieces are falling into place. China reported that its PMI fell to 52 and that is almost a point lower than it was last month. Consensus estimates were slightly more pessimistic and the news was well received. This is not the reaction I expected, but the day is young. Analysts believe that China will raise rates during their holiday next week. There is also talk of another hike in bank reserve requirements. As the month progresses, I expect to see additional signs of contraction and we are in the beginning stages of a slowdown.

The Chinese government increased the price limit for electricity. This will raise the cost of living for consumers and it will increase manufacturing costs. Utility companies will produce more electricity because they are not operating at a loss and this should reduce power outages. On a longer term basis, the problem will not be solved. Utility companies will not reinvest when the government can impose price ceilings anytime they want. Analysts estimate that 20% of utility companies are on the brink of bankruptcy. Power shortages will continue and that will impact manufacturing.

China is determined to fend off inflation. It is considering capital gains taxes and a revaluation of the Yuan (+10%). Both of these actions would result in economic contraction. The world is counting on China to pull us out of this recession and any decline in activity will disrupt a fragile global recovery. Their aggressive actions tell me they will continue to tighten.

This morning, we learned that private-sector job growth is declining. ADP reported 38,000 new jobs were created by small and medium-sized businesses in May. Economists forecasted a gain of 175,000 jobs and the actual number missed estimates by a large amount. In a separate report by Challenger Gray & Christmas, employers announced plans to cut 37,000 jobs in May. That is up 1.8% from April and 4.3% from May 2010. Clearly, jobs are on the decline. These employment agencies have their finger on the pulse of small and medium-sized businesses. Since they process payrolls and recruit, I believe their numbers accurately reflect current conditions.

Initial jobless claims are the timeliest economic release produced by the government. States report new unemployment applications on a weekly basis and the number is tallied across the country. New claims might fluctuate on a week to week basis do to weather/holidays, but the four-week moving average is an accurate indicator of the current job market. Initial jobless claims have been creeping higher the last two months and they signal trouble ahead.

Last month, the government’s Unemployment Report contradicted the ADP report and initial claims. It is a behemoth release and the entire financial community scrutinizes the number. Consequently, I don’t trust it. There is too much at stake and I feel it is manipulated. The health of the nation and the President’s effectiveness are measured by this one report.

In recent months, jobs have declined and so has the unemployment rate. Economists can justify why this happens, but I feel the numbers are massaged. At any time, the government can lop off jobseekers and claim that they have given up looking for work. There are also seasonal adjustments left and right. The market still pays attention to the number, but I do not.

Last month, the government reported 244,000 new jobs were created in April. That went against a soft ADP release and rising initial jobless claims. Analysts are expecting 180,000 new jobs in May. I believe April’s number will be revised lower (ADP’s April number was lowered today) and May’s number will miss estimates by a wide margin. Public-sector jobs are being slashed to balance budgets. As reported by ADP and Challenger Gray & Christmas, the private sector is contracting.

Last night, the House held a vote to raise the debt ceiling without any budget cut guarantees. As expected, it was overwhelmingly voted down. Each day that we get closer to August without resolution, the likelihood of a swift market decline increases. Politicians might take comfort knowing that the market did not plunge in 1995 when this debate went on for six months. The conditions are very different this time around. In the mid-90s, unemployment was around 5% and the economy was in the beginning stages of a strong growth cycle. Furthermore, our national debt was only $4 trillion and we did not just recovered from a financial crisis. Global credit conditions were much stronger at the time and the EU/Japan was not teetering on default.

Greece has probably secured financing, but the scrutiny is intense. They will be selling assets to secure loans. The bigger problem is that structural issues (retirement/healthcare) have not been addressed and Greece will be back at the trough in the not-too-distant future.

ISM manufacturing was just released. It fell from 60.4 to 53.5 and that was much worse than expected. As I mentioned yesterday, production was ramped up in anticipation of strong demand. Consumers are cutting back and inventories are building. I am also expecting a weak ISM Services number Friday.

Strong earnings and attractive stock valuations will keep this market afloat and the two-year up trend will be hard to turn. We are likely to see a decline this week and SPY 130 will be tested. However, it will take mounting evidence of deteriorating economic conditions domestically and in China to generate a sustained decline. Only when technical support levels fall with ease can we place more aggressive bearish bets.

If you followed my advice and bought puts yesterday, you are short. We are in at a good price level and that gives us staying power into Friday’s number.

Sit back and enjoy the ride. We should close on the lows today. 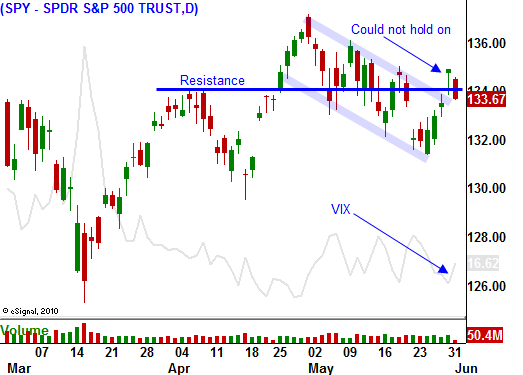