Yesterday, the market tanked on weak economic news. China’s PMI fell to 52 in May and the ADP employment index missed expectations by a wide margin. A negative tone was set before the open and a huge decline in ISM manufacturing sparked fear of a recession. The S&P 500 fell 30 points and closed on its low of the day.

This morning, initial jobless claims slipped by 6,000 to a seasonally adjusted 422,000. This number was higher than analysts expected, but it was not disastrous. Workers who lose their jobs tend to postpone filing for unemployment during major holidays and I suspect this number will be revised upwards next week.

Tomorrow, the Unemployment Report will be released. I believe it will miss expectations by a wide margin and April’s number will be revised downward. ADP accurately gauges private sector employment and the substantial decline in job growth is a warning sign. Public sector jobs have been slashed to balance budgets. Analysts are expecting 180,000 new jobs and I feel we will be lucky to see 100,000 new jobs. Initial jobless claims have been creeping higher and Challenger Gray & Christmas (job placement company) reported that planned corporate layoffs are on the rise. Jobs are the key to a sustained recovery.

The economic news is fairly light next week. Monday is a banking holiday in China and many analysts expect an interest rate hike. They have progressively tightened this year and they are likely to take action in the near future. If they do raise rates, the market will have a negative reaction.

The situation in Europe is not good, but it does not present an immediate danger. As long as Spain’s bond auctions go well, fears of a credit crisis will be contained. China is buying their bonds and interest rates should remain stable. Spain also reported a decline in initial jobless claims and that is a positive sign (20% unemployment rate).

I believe the market will try to rally early this morning. Eventually, that move will lose its steam and Asset Managers will take some chips off the table ahead of tomorrow’s Unemployment Report.

Remember, these are the first signs of economic weakness. Strong profit growth and attractive stock valuations will keep sellers at bay. The two-year uptrend will be hard to turn and it will take a series of bad economic numbers to generate strong selling pressure.

During a light news week, traders are likely to find a positive spin. There will be talk of QE3 and temporary conditions that are stalling economic growth. The market will rebound slightly next week and it will wait for the next major release.

We have fantastic profits in our put positions. Protect your gains. There will still be more downside before the week is over. Start scaling out of put positions on weakness. The news was bad, but not disastrous. 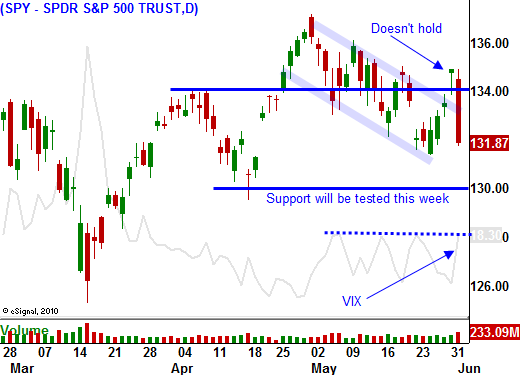