Yesterday, the market took a breather after a big decline on Wednesday. Traders squared up ahead of today’s Unemployment Report.

In yesterday’s comments I suggested hanging on to put positions if the market was flat. All of my indicators pointed to a weak jobs number and the market still had plenty of downside. Analysts were expecting 170,000 new jobs in May and only 54,000 jobs were added. Furthermore, there were 30,000 fewer jobs in March and April.

ADP processes payrolls for small and medium sized businesses. Challenger Gray & Christmas is a recruiter and they know the demand for professionals. Initial jobless claims are tabulated by each state when a worker files for unemployment. The number is submitted to the government and is released each week. In all of these instances, the data is timely and accurate. In each case, the data suggested weak demand for workers.

There is not a problem when these sources are consistent with the government’s Unemployment Report. It is the most important economic release each month. Fed policy and the President’s popularity are impacted by it. When there is a divergence, I question the government’s calculations. There is too much at stake and the number is vulnerable to manipulation.

The bottom line is that corporations have increased productivity. They can accomplish more with fewer workers and they have trimmed the fat. The public sector is slashing payrolls to balance budgets and all hope of a job recovery rests with the private sector. Hourly wages have been declining for two straight years and they are not keeping up with inflation. New hires are happy to land a job and they are willing to accept lower pay.

China is faced with the opposite problem. Wages are increasing by 20% annually. Factories can’t keep good workers and training costs are skyrocketing. Next week, I will describe this situation in greater detail. The bottom line is that capital is drying up and input costs are rising. Manufacturers are not able to pass along higher costs and many are closing their doors.

Inflation is a major concern in China and they are slamming on the economic brakes with both feet. Many analysts feel they will raise interest rates this weekend during a national holiday. Their actions have been steadfast and the next rate hike is just around the corner.

The entire world is counting on China to pull us out of this recession. When their economy contracts, it will reveal just how weak Europe, Japan and the US are. Government stimulus is keeping this recovery alive and China’s growth has masked the problem. Soon, our artificial life support will be tested.

For today, I suggest taking profits on put positions. Support at SPY 130 should hold. This is the first sign of trouble and analysts will dismiss the decline in job growth. Temporary conditions like weather and the earthquake in Japan will be blamed for the shortfall. Analysts will speculate that China will stop tightening and the Fed will consider QE3 (this is contrary to what I believe). The news is light next week and I am expecting prices to stabilize. We could even see a small rally.

Corporate profits are up 25% year-over-year and the S&P 500 is trading at a cheap forward P/E of 13. The two-year uptrend will be difficult to turn and Asset Managers will support the market. It will take mounting evidence over a period of months to generate strong selling pressure.

The market is likely to trade within a range the next two months. There will be opportunities on both sides. It will be time to trade relative strength and weakness. We will be keeping our bets small and we will favor the downside as economic conditions continue to deteriorate.

We have fantastic profits in our put positions. Don’t be greedy! 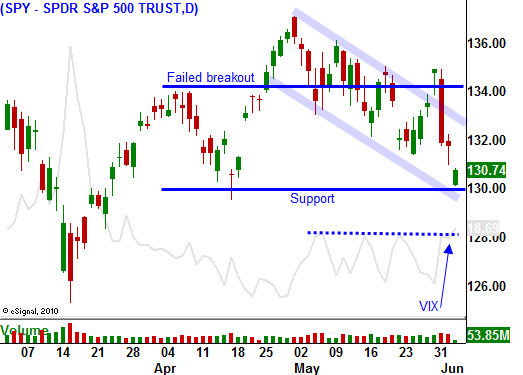