Analysts were expecting 180,000 new jobs in May and only 54,000 jobs were created. Furthermore, March and April figures were reduced by 39,000 workers. State and local governments are slashing payrolls to balance budgets and the private sector has been slow to make up the difference. Corporations are lean and mean. They have increased productivity and they are not going to add to their overhead unless they see a sustained pickup in demand.

Hourly wages are not keeping up with inflation and that means real income is declining. People are happy to find work and they don’t have leverage to negotiate pay. Headcounts in the service sector are growing, but the new hires are finding employment in low skill industries like retail and restaurant. We need to see higher-level job growth that includes bankers, attorneys and accountants.

Economic releases have generally been weak. Q2 GDP, durable goods orders, ISM manufacturing, Chicago PMI and ISM services all point to contraction. The releases this week are fairly light and they include the Beige Book on Wednesday and initial claims on Thursday. I am not expecting a major market reaction to either number.

Thursday evening, China will release its CPI. Their government has been slamming on the brakes to fend off inflation and their progressive actions will result in an economic slowdown. Many analysts believed that China would raise rates over the weekend. They did not and that could be a slight positive for today’s price action. This Thursday, China will release its trade balance. Last month, imports fell dramatically. That news was swept under the carpet and analysts dismissed it as “Japan related”. I believe manufacturers could be cutting back on raw materials.

China has had incredible power outages. The citizens are the first to receive electricity (to prevent civil unrest) and factories have had to shut down. The government imposed price ceilings on electricity. Utility companies were losing money so they stopped generating power. Now, the price ceiling has been raised and utilities will be a little more inclined to produce. This is a longer-term problem since private capital will not flow into this industry when the government has the power to fix prices. Under the old price ceiling, analysts estimated that 20% of the utility companies would’ve gone bankrupt in a year.

Extreme tightening, power outages and the earthquake in Japan will all take their toll on China’s economy this summer. The entire world is counting on them to pull us out of this recession and when their activity declines, this recovery will stall. Europe, Japan and the US have been artificially revived through loose monetary policy. We are on life support and now China is ready to pull the plug.

China’s government has been fueling hyper-growth for years. They have fixed electricity prices, subsidized gasoline, suppressed the Yuan, maintained loose banking requirements… there are countless examples of how their government has intervened to stimulate growth. Now the punch bowl is being taken away and we will see just how strong/weak the organic growth is. I suspect excess and inefficiency. If I am right, the pullback will be substantial.

The market took a hefty tumble last week. Looking back over the last two years, it is unusual for stocks to post big declines back to back. They will usually see a nasty drop and a period of consolidation. The market falls twice as fast as it rises and selloffs often get over extended. I believe support at SPY 130 will hold until Thursday. Analysts will instill confidence by talking up stock valuations. They will point out temporary conditions (earthquake and weather) and they will entertain additional easing by the Fed.

Option implied volatilities barely moved last week and that tells me investors are not worried about last week’s economic releases. After a nice bounce to SPY 132-133 this week, the market will be ready for another round of selling. Thursday’s releases from China could be the catalyst.

I have taken profits on all of my short positions and I am on the sidelines. I might buy a few calls this week, but my positions will be small. I am favoring the downside this summer and I will short the market into rallies. Be patient and wait for the next opportunity. The price action will be quiet this week. Healthcare, energy and tech are my favorite sectors to get long. Keep your size small and use the Live Update table as your guide. 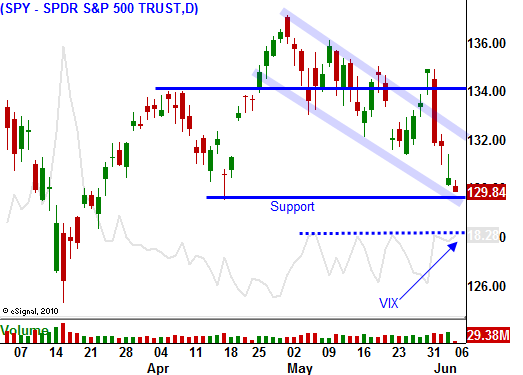