Yesterday, the market started off on a positive note after falling 4% in a matter of days. The price action was choppy and the volume was light. By the end of the day, a 10 point gain in the S&P 500 was erased. That reversal set a negative tone this morning and bears are probing for support.

GDP came in at 1.8% when analysts were looking for a slight increase. It did not decline, it stayed flat. ADP employment and the Unemployment Report came in light, but both showed job growth. ISM manufacturing and ISM services were well above 50 indicating economic expansion. Traders are concerned that these are the early signs of an economic slowdown and profit-taking has pulled stocks off of their highs of the year. In the early stages of a market transition, the declines tend to be swift and short.

For that reason, I was anxious to lock in profits on short positions. I still believe that a bounce is in the cards. Traders have already priced in hawkish news from the ECB tomorrow. The consensus is that Europe will raise rates in July. There is also nervousness about China’s trade balance. They will release the number tomorrow night and last month imports fell more than expected. Overnight, Germany announced a trade surplus because exports declined 5.5%. This is not a particularly good sign, but these events are already priced in. Part of the decline is due to the earthquake in Japan.

This afternoon, the Fed will release its Beige Book. It is likely to show moderating growth, but growth nonetheless. Tomorrow’s initial jobless claims number could spook investors. It tends to climb after holidays because people postpone applying for unemployment compensation. Traders will realize the spike is temporary and the market should be able to look past the number.

As I’ve been saying, Greece and Portugal will be able to secure financing. These problems are relatively small and as long as Spain’s interest rates are stable, European credit concerns will not escalate.

There are rumors that Republicans are considering a short-term increase in the debt ceiling. If that is true, it would be bullish for the market.

The end of QE2 and the impact new banking regulations on the financial sector has also been priced into the market. Quantitative easing might have ended, but monetary policy is still very loose. Banks got the support they needed and now that profits have returned, they are paying for their mistakes.

If it sounds like I’m getting bullish, I am not. I simply believe that the market is due for a bounce. Asset Managers are continually looking for entry points and with bond yields at historic lows; stocks are the best game in town. They will wait for signs of support and then they will buy.

I am out of my short positions and I have been selling out of the money put credit spreads on strong stocks. As long as SPY 125 holds, I will maintain these positions. If that major support level fails, I will buy back my put spreads and I will reestablish short positions. I don’t see this breakdown happening in the next week unless China raises interest rates and their imports fall dramatically. The combination of the two events is unlikely.

There isn’t much news for the market to trade off of and it seems comfortable probing the downside for support. That is likely to continue until we get a shred of good news. The price action feels bearish, but the volume is light and this two-year uptrend has been extremely strong. At a moment’s notice, stocks can explode higher and shorts will run for cover. I prefer to be passive at this juncture. Wait for support and sell puts spreads. Healthcare looks strong and there are individual stocks that look great at the top of the Live Update table. 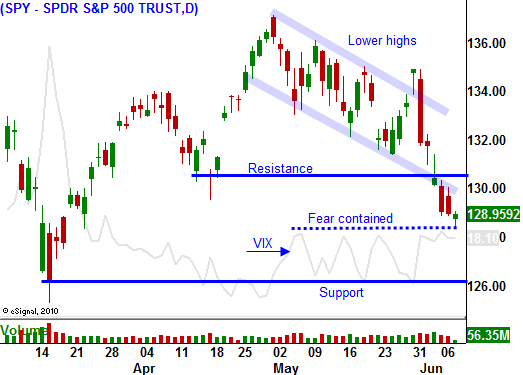