In the last week, the focus is shifted from strong earnings to deteriorating economic conditions. Since the Memorial Day holiday, the market has declined more than 6%. Bears are in control and in a light news environment, they are probing for support.

Domestically, signs of a slowdown have been surfacing for weeks. Initial jobless claims have been rising steadily and the four-week moving average is a good indicator of employment conditions. This morning, initial claims came in at 427,000 when analysts were looking for 415,000. People tend to postpone filing for unemployment benefits during major holidays and I believe this number might be inflated. The market rallied after the news and I take that as a positive sign for the market.

Traders are also bracing for hawkish statements from the ECB this morning. They plan to raise rates in July and the news has already been discounted by the market. The ECB will remain “strongly vigilant” and European markets are flat after the announcement.

This evening, China will report its trade balance. Last month, imports fell more than expected and that was largely attributed to the earthquake in Japan. I suspect that manufactures are cutting back on raw materials because of massive power outages and soft demand. If imports declined dramatically in May, the market will have a negative reaction. If they were down slightly, the market will stage a relief rally.

China has been aggressively tightening to fend off inflation and their actions will result in economic contraction. Many analysts expected China to raise rates last weekend – they did not. As long as they hold off, the market has a chance to bounce. Based on their actions this year, they will tighten again in coming weeks.

Looking back over the last two years, market declines have been short-lived. The upward momentum for this two-year rally is strong and it will be difficult to turn. Corporate earnings were up 25% year-over-year and the S&P 500 is trading a forward P/E of 13. Bond yields are at historic lows and stocks are attractively valued. Asset Managers have been looking for entry points and they will open their wallets when support is established.

I am not looking for a massive snapback rally to the highs of the year, but I am looking for a 40-point S&P rebound. All of the bad news is priced in and it wasn’t dire enough to justify further selling. ADP and the Unemployment Report showed a slowdown in job growth, but we did add jobs in May. ISM manufacturing and ISM services pulled back from historically high levels, but both numbers were still above 50 indicating economic expansion.

Next week, the economic releases will pick up. Retail sales, PPI/CPI, Empire Manufacturing, Industrial Production, initial claims, the Philly Fed and LEI will be released. These numbers typically don’t drive the market, but traders will be looking for some shred of positive news. Consistent with yesterday’s Beige Book, I believe conditions will soften, but the news won’t be dire.

At any time, the Fed can come to the rescue. Ben Bernanke suggested he has many bullets in his gun, but he did not want to be specific for fear that the market would start pricing these actions in. He is ready to take steps if needed. QE2 is ending, but monetary policy is still very loose. Politicians are considering an extension of payroll tax credits and there are rumors that Republicans might consider a temporary solution to the debt ceiling. Any positive news will send stocks higher and bears will scramble as they have the last two years.

Greece and Portugal will secure financing. As long as interest rates in Spain remain stable (China is supporting their bond auctions), worries of a European credit crisis will be contained.

I am distancing myself from the action by selling out of the money put credit spreads on strong stocks. I believe support at SPY 125 will hold and the likelihood of a bounce as high. As long as this level holds, I will maintain my positions. The price action today is positive after two weak releases. If the gains can hold throughout the day, it will be a positive sign. China’s trade balance will be the next obstacle. If I see a decent reaction to that release, I will sell additional put credit spreads tomorrow. The strongest candidates are rising to the top of the Live Update table. Look for stocks with strong support and stable price action during the recent market decline.

If the market closes below SPY 125, buy back the put credit spreads. 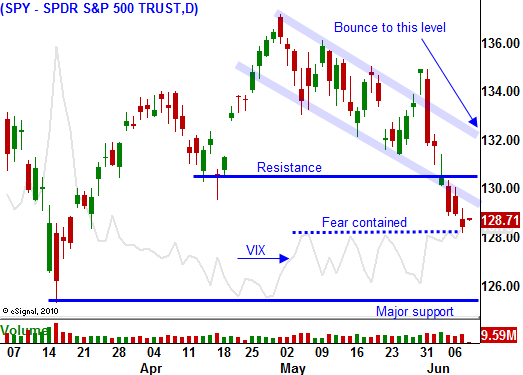