Last week, stocks continued to drift lower in the absence of news. The downward momentum started two weeks ago and buyers are waiting patiently for signs of support.

The SPY has broken through 130 and 128. Those levels are significant, but major support lies at 125. This is a “quadruple witch” and there will be position squaring. I am expecting a choppy week with light trading volumes. Economic conditions are starting to soften, but the backdrop is not dire enough to justify a major selloff.

We added jobs in May and this was the first weak Unemployment Report this year. Some analysts are viewing this as a temporary soft patch. ISM services and ISM manufacturing are both above 50 and that indicates economic expansion. Granted, activity is declining, but it is not dire.

QE2 is ending and the market has had months to prepare. The Fed has stated that it will not raise interest rates and Ben Bernanke said he has many bullets left to fire. He did not get specific because he does not want the market to start pricing in additional easing.

Nothing gets the attention of Washington faster than a market selloff. Politicians are talking about an extension of payroll tax credits and Republicans are considering a temporary debt ceiling solution. Either of these actions would be bullish.

EU Finance Ministers will be meeting this week. Greece will grab the headlines and there will be banter back and forth. Germany has agreed to lend Greece money and a credit crisis this summer is unlikely. China is supporting Spain’s bond auctions and this is where the line has to be drawn. Spain is too big to fail and too big to bail. As long as their interest rates are stable, credit fears will be contained.

Inflation will be the focal point this week. We will release PPI and CPI in two days. Energy prices have been declining and even if the numbers come in “hot”, I believe the market will be able to shoulder the releases. Tonight, China releases its CPI and analysts are expecting a 5.4% rise. Anything higher could spark fear of another interest rate hike.

There are many issues for the market to deal with and I believe they will fester all summer long. I am looking for a nice rebound and stability into earnings season a month from now. By early August, the market will be ready for another decline.

The two-year uptrend is strong and Asset Managers are looking for an entry point. Once they see stability, they will bid for stocks. Profits were up 25% year-over-year and the S&P 500 is trading at a very cheap forward P/E of 13. Bond yields are at historic lows and equities are the best show in town.

A hot inflation number from China and an ensuing rate hike are the only concerns this week (not likely). The news is light and this combination could result in a test of SPY 125. Otherwise, I believe it will be a quiet, choppy week.

I am cautiously selling out of the money put credit spreads. I won’t aggressively add until I see strong selling and an intraday reversal. That will signal a temporary low. This early rally will get tested today and if the market can’t add to gains by mid-morning, bears will try their hand. They will probe for support.

I know my put credit spreads will take a little heat and that is why I am not adding to positions until I see that intraday reversal off of a low.

Be patient and wait for signs of support. 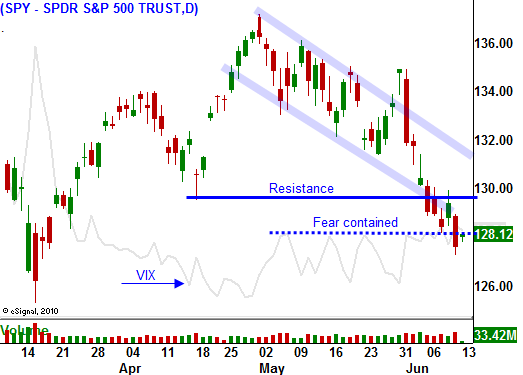