Yesterday, the market staged an impressive rally and it was able to advance throughout the day. This is the first decent price action we have seen in weeks and almost 90% of the stocks traded higher. There was late day selling and that should serve as a reminder that we are not out of the woods.

China’s CPI came in as expected and traders were relieved that it did not come in “hot”. They have progressively tightened to fend off inflation and this might postpone a rate hike for a few weeks. Bank reserve requirements were increased by 50 basis points and that was considered a favorable alternative to a rate hike. China’s industrial production came in better than expected and retail sales were in-line.

This sparked a rally in Asia. China is critical to global economic growth and a slowdown would cause markets to decline. I still believe that we will see contraction in China, but it might take another month or two before we see signs. That means it is not an immediate concern during the next few weeks and from my perspective, this bullet has been dodged.

The other concern is the Euro credit crisis. Greece is on life support. Their debt has been continually downgraded and if not for the ECB/IMF, it would have defaulted long-ago. We can expect trials and tribulations to continue, but the problem is small enough that it will get resolved. This news is weighing on the market today. Germany and the ECB are disagreeing about how Greece’s debt should be restructured. From what I’m reading, they will still get their financial aid in a week and everything should be fine. This problem will grow over time and other PIIGS nations will come to the trough. I don’t see a Euro credit crisis being an issue this summer.

China has committed to buying Spain’s debt. Their interest rates are stable and this is where the line has to be drawn. Consequently, I believe Greece is not the reason for today’s decline, it is an excuse. All of the bad news is already priced in and we know they will fail without aid. There is more to today’s decline than Greece, although it is grabbing the headlines.

This morning, CPI came in as expected. The market was already weak before the open and Empire Manufacturing sent the S&P 500 down another four points. It came in much weaker than expected. This is normally not a huge number, but it is one more nail in the coffin. During a light week of news, the market is searching for something it can sink its teeth into. Quadruple witching is adding to the volatility.

After the first few hours of trading yesterday, I thought we would finally get a decent bounce and some follow through. The news this morning was not negative enough to justify this decline and it tells me that traders are still nervous. It will take another week or two to restore confidence.

This is why I like to sell out of the money put credit spreads. I am a safe distance from the action and today’s decline is not an issue. The key is to focus on stocks that have recently weathered the storm and have strong support levels. Buyers are already nibbling and they are trying to accumulate shares at this level. That provides added protection for the put credit spread.

Bad news is priced in and I believe we could see a positive reaction to tomorrow’s initial claims number and the Philly Fed. If bears can’t push the market lower by midday, we could see a nice little rally in close. This would be a very positive sign. Asset Managers are waiting or signs of support and they are ready to place money.

I still would not be surprised to see SPY 125 tested before we have a bona fide rebound. However, I know that the buying will come very quickly once it starts and all it will take is one positive news item. Republicans are talking about a temporary solution to the debt ceiling and both parties are considering an extension of payroll tax credits. Any news item like this could do the trick. Consequently, I am gradually selling put credit spreads. This strategy gives me the breathing room I need and I will be in position when the bounce comes.

If support at SPY 125 fails, I am buying back my put spreads and heading for the sidelines.

Be patient in this choppy market and keep your size small. 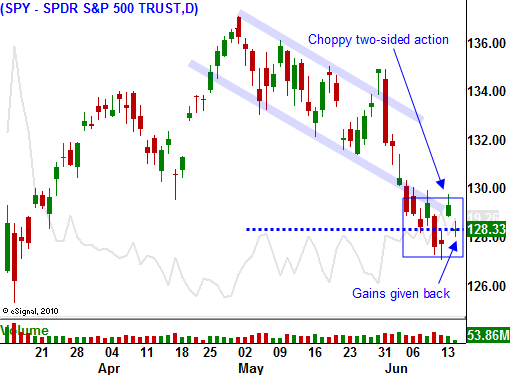