Bears Have Control and Fear Is Rising. Wait For Signs of Support. Be Ready to Sell Put Spreads

Yesterday, investors fled for the exits when the situation in Greece worsened. They’ve seen this movie before and rioting in the streets reminded them of the selloff last summer. The EU is showing signs of fragmentation and the market is concerned.

With regards to Greece, Germany and the ECB are divided on how debt restructuring should be handled. Germany wants a forced extension of bond maturities and the ECB wants lenders to voluntarily roll out maturities. When both parties failed to agree, they decided to postpone any action for three weeks. The market does not like uncertainty and European markets tanked.

Ireland has been complaining about the terms of its financial aid. In exchange for a better rate, the EU has asked them to raise corporate tax rates so that there is a level playing field throughout Europe. Today, the Finance Minister said that won’t happen. This is just another example of how divided the EU is becoming.

Strong nations are reluctant to bail out weak nations but they know they have to. A default in Greece will trigger a financial crisis because banks have extensive exposure. The amounts we are talking about are negligible and Greece will secure its €12 billion loan in a few weeks. The EU will not let it fail.

The debt crisis will continue to escalate, but I don’t feel it will reach a flashpoint this year. China has committed to buying Spain’s debt and their interest rates have remained stable throughout this turmoil. I monitor their interest rates every day and if they start to creep higher it will be a warning sign.

The chart patterns the last few weeks look very similar to what we saw last summer. However, back then the Euro credit crisis had not been addressed. We weren’t sure if stronger nations would let weaker nations fail. A year later, we know they are committed to helping and the new credit facility will be ramped up soon. If the EU starts raising money, fear will settle down as it did last fall when the facility was established.

The economic statistics are deteriorating and fear of a double dip recession is taking root. Next week, GDP and durable goods will be released. I’m not expecting any fireworks from those two numbers. The FOMC meets and I would be surprised if their comments were not “market friendly” after the recent market decline.

This morning, initial claims and the housing data both came in better than expected and that should provide a small bid to the market.

The SPY is sitting right at its 200-day moving average. The NASDAQ has already broken through this level and I am fairly certain that bears are not finished yet. They will probe for support. Until we see a substantial intraday decline with a reversal, this process will continue. Support at SPY 125 should hold. If it does not, I will buy back all of put quick credit spreads.

The VIX has started to move higher and that is a sign of fear. All it will take is one good news item to stop the bleeding. I don’t know where it will come from, but it is bound to be government related. The EU could decide to hold another emergency meeting or Republicans could agree to a temporary increase in the debt ceiling. Perhaps Washington will extend payroll tax credits. Any one of these actions could spark buying and that will define a support level.

This is quadruple witching and we can expect greater than normal volatility. Bears will try to push the market below support. If they are successful and the downward momentum builds throughout the day, we could hit an air pocket. On the other hand, if bears can’t gain any traction by midday, buyers might start nibbling.

I would like to see an intraday reversal. If we don’t get that capitulation, I need to see strong price action into the close with a couple of days of follow-through. Don’t get aggressive until you see these signs. I am not selling additional put spreads today. I have enough positions on and I want to see how the market closes out the week. There are excellent values and with option premiums moving higher you can distance yourself from the action. Be patient and trade small size. 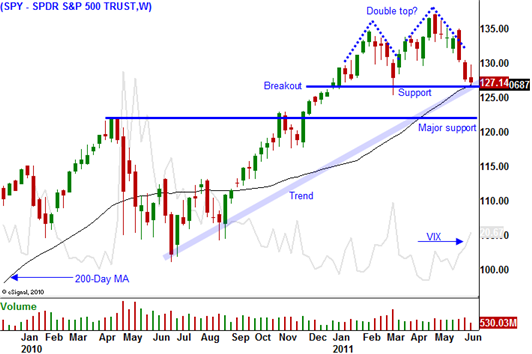