Yesterday, the market staged an impressive rally. Quadruple witching and rioting in Greece created an oversold condition last week and stocks rebounded. Tuesday’s move had a short covering feel to it.

This morning, stocks are trying to grind higher. Last night, Greece passed its confidence vote by a better-than-expected margin and this should pave the way for much-needed funding. Austerity programs and asset sales will be used to secure future funds from the ECB/IMF. The EU knows that once the first domino falls it will start a chain reaction. We won’t see a default in Europe until many countries reach Greece’s dire condition and investors shy away. That might not happen for another year or two, but it is inevitable.

FedEx posted better than expected results and the guidance was excellent. This company is a barometer of economic activity and the news is supporting this rally.

This afternoon, the FOMC will release its statement. Given the recent decline in economic activity, I am expecting “dovish” comments. Ben Bernanke will hold a press conference afterwards and I’m certain he will be asked about possible Fed actions if the economy slips into a double dip recession.

Rumor has it that Republicans and Democrats are making progress on the budget talks and both parties are optimistic that they will be able to reach an agreement soon. If Republicans agree to temporarily raise the debt ceiling, it will be bullish for the market.

The economic news is rather light this week and I do not believe GDP or durable goods orders will have a material impact on stocks. Bad news is priced in and “soft” economic releases are expected from here in. The Unemployment Report won’t be released until July 8th and that means we are in for a quiet period.

Soon after the jobs number is released, earnings season will begin. The price action is typically been positive into earnings and I am expecting this market bounce to continue. Profits have been excellent and the news will help to calm credit crisis fears.

Inflation is rising quickly in China and we can expect a rate hike soon. Economic activity has not declined significantly and until it does, the market should be able to hold its ground or move higher. Eventually, progressive tightening in China will result in economic contraction and that will impact global markets.

The news has been positive this week and I am expecting a light volume rally. Sell out of the money put credit spreads and distance yourself from the action. Pick strong stocks with defined support levels and make sure they held up well during the recent market decline. Look for positive price action and quiet trading this week. 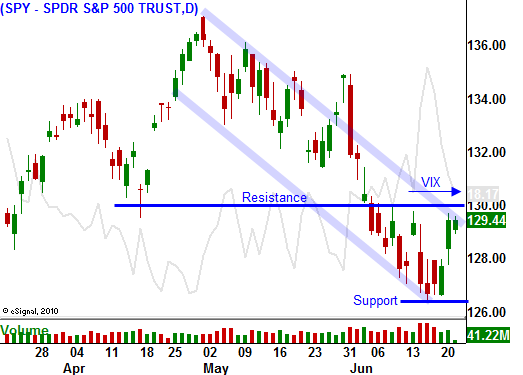