Brief Shallow Bounces Are A Sign of Weakness. Asset Managers Won’t Buy Until Issues Are Resolved

This week the market showed early signs of stability. After a nasty quadruple witch, stocks moved higher on the notion that Greece would pass its confidence vote. The results were better than expected and now it can secure funding from the ECB/IMF.

Stocks rallied on the news and it appeared we could have a nice bounce. Yesterday, the Fed released its statement and the Chairman held a press conference. He said that interest rates would not be moving higher for at least two sessions and he noted that economic conditions were softening. Ben Bernanke also said that he does not see us slipping into a second recession.

After the speech, stocks started to drift lower and that lead to heavy selling into the close. The S&P 500 finished 10 points lower after trading on the plus side most of the day. This price action was very bearish and it shows that investors are anxious to sell into rallies.

This morning, flash PMI’s from around the globe came in soft. In China, that was construed as a sign that inflation could it be easing. They have progressively tightened and this reading could postpone an interest rate hike. From my perspective, any economic decline in China will have a devastating effect on global economies. I believe China will continue to apply the brakes and we will see a rate hike in the next two weeks.

In Europe, the PMI fell to 54.2 from 56 in May. On the surface the number doesn’t seem too bad because a level above 50 indicates economic expansion. However, if you strip out France and Germany, the rest of the EU was contracting. An economic slowdown combined with the credit crisis has produced dark storm clouds. European markets were down on the news.

There are also new reports from Greece. Even though it has agreed to sell assets to finance its debt, there is uncertainty. Greece is the only country in Europe without a centralized registry of deeds. About 40% of the registered state properties are disputed and an additional 25% have questionable legal status. This means two thirds of the real estate will be very difficult to move and raising $50 billion will be extremely difficult if not impossible.

From a trading standpoint, Europe should determine bank risk exposure and raise money to fortify the balance sheets of financial institutions. They will suffer large losses, but the problem can be contained. Over time, banks can repay the loans. This would allow the EU to cut its ties with Greece. The default would be devastating for the market in the short run, but the cancer would be removed. Ireland, Portugal, Spain and Italy have better footing and they don’t have nearly as many issues. These “cans” can get kicked down the road for a while, Greece cannot.

I am still trying to get my arms around something I heard on CNBC. One of their guests said that 50% of Greece’s employment is in the public sector. I thought I might have heard that incorrectly and perhaps it was 15%. The data is hard to come by, but I found a source that says 2 million people work for the government. The total labor force is 5 million people. If you think our government is out of control (and it is), imagine half of your neighbors working in the public sector. No matter what aid Greece gets, this system is doomed.

The market had plenty of time to consolidate from an oversold condition. This would normally lead to a decent rebound as shorts cover. When the bounce is brief and shallow, it indicates heavy selling pressure. Investors are anxious to unload stocks on any rally and the bounce never gains traction. This is the type of price action we are seeing.

Earnings season is just a few weeks away and I believe it will lend support to the market. Yesterday, FedEx posted great numbers and it provided strong guidance. It is considered a barometer for economic activity. Corporate profits have been strong and we need this positive news to offset pessimism. I still believe support and SPY 125 will hold over the next few weeks.

Once we get that earnings rally, stocks will top out. Guidance will be cautious and looming issues (credit crisis, debt ceiling, and a slowdown in China) will dominate trading activity. The decline we see later this summer could take us below major support. The shallow little bounces we’ve seen the last two weeks are a sign of weakness. Bulls simply can’t gain any traction and Asset Managers are not compelled to pile into stocks as long as these issues are unresolved.

I am hanging on to my put credit spreads. Time decay and a collapse in implied volatility has helped the positions. Put buyers and call buyers have lost money in the last two weeks. This is a good time to be short premium. If support at SPY 125 fails, I will buy back my put spreads. I don’t plan on adding to positions unless we get an intraday reversal on material news (temporary increase to the debt ceiling). This is unlikely.

For nimble traders, there have been great short term trading opportunities as the market makes large intraday swings. The key is to minimized overnight risk. Use the Live Update table early in the day and stick with the direction of the opening move. 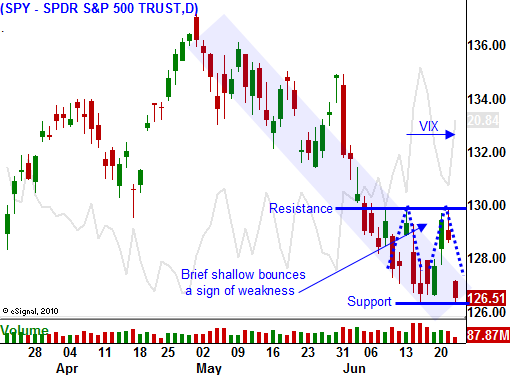