Stcok Market Will Rally Into the Weekend. Jobs Will Provide A Headwind Next Week

I’ve been looking for market bounce and this week we got one. Worst case scenarios were priced in and the news was better than expected.

Greece passed the first of two austerity votes yesterday and the Prime Minister believes he has enough support to win the second vote today. This outcome will show commitment and it will pave the way for ECB/IMF funding in the next two weeks.

Spain and Italy are of greater concern in the long run. Both countries are considerably larger and the bailout amounts would severely stress the European Union. Interest rates in both countries inched to new highs this week, but the breakout was not convincing. As long as interest rates in Spain/Italy are stable, credit crisis concerns will be contained. China has been buying bonds in both countries and this week Premier Wen has voiced his support for austerity while touring Europe.

Speaking of Premier Wen, last week he declared victory over inflation in China. The market construed that as a sign that additional tightening might be postponed. China’s PMI will be released tonight and a “soft” number is expected. Last week’s flash reading came in lower than expected. This news is already priced into the market and it only strengthens the argument that China will hold off on a rate hike.

This week, Japan released a better-than-expected industrial production number. This has most analysts believing that a “V” shaped recovery is underway.

Domestically, existing home sales improved and Chicago PMI came in better than expected. Initial jobless claims came in above 425,000 and jobs will be a concern heading into next week. ADP employment and the Unemployment Report are likely to be “soft” next week. The market will have an initial negative reaction, but I believe it will rebound quickly.

Earnings season is right around the corner and the market has been strong ahead of the announcements for eight straight quarters. FedEx, Oracle and Nike all posted strong results and gave excellent guidance. This is the positive news the market needs. By the end of July, I’m expecting this rally to stall. Cautious guidance will spook investors.

The market has broken through resistance at SPY 130 and that is now a support. Stocks typically rally into major holidays and I’m expecting positive price action today and tomorrow. ISM manufacturing will be released after the open Friday and like Chicago PMI, it should generate a positive reaction. The market could be a little shaky next week, but it will move higher into earnings season.

I have been selling out of the money put credit spreads and those positions have performed beautifully. I was able to distance myself from the action and capture rich option premiums. Now, I am shifting to call buying. Implied volatilities have declined and bulls have the momentum. I’m keeping my best small since I feel that this move will be relatively short-lived. Industrials, energy and tech look attractive. 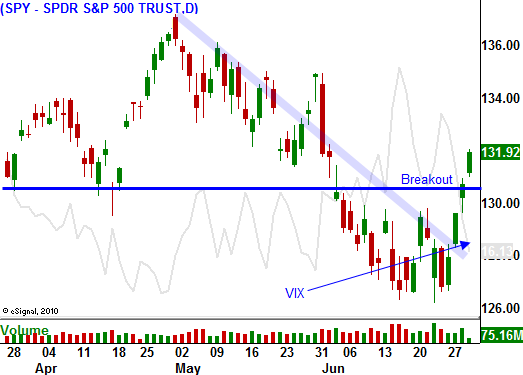