Jobs Data Will Stall This Rally Next Week. Buy Call Options On Support!

This has been an excellent week the market. Greece passed both austerity votes and it should receive the next round of funding from the ECB/IMF. Economic releases have generally been positive starting with existing home sales and ending with ISM manufacturing today.

Overnight, China and Europe released PMI’s. They were in line with expectations and they were consistent with last week’s flash readings. The market had prepared itself for worst-case scenarios and once the events started to play out, there was room to run.

As I’ve been mentioning, stocks have a tendency to rally into major holidays. That influence plus end of month/end of quarter strength sparked buying. Once the bid was established, Asset Managers quickly scooped up stocks.

Next week, the employment data should be soft. The market has staged an impressive rally and it should take a breather next week. I’m not looking for a major decline, but I believe the S&P 500 could pull back 20 points or so. Support at SPY 130 will hold and the table will be set for a nice rally into the beginning of earnings season.

FedEx, Oracle and Nike set the tone last week. The earnings were great and they raised guidance. Some of the strongest companies announce early in the cycle and that always boosts optimism. We will get a heavy dose of earnings from the financial sector and banks have been badly beaten down. I believe they are due for a bounce and that will pave the way for the next leg of this rally.

By the end of July/beginning of August, guidance will start to wane. Tightening measures in China could also result in an economic slowdown. If the debt ceiling is not raised, we are likely to see a sharp, swift market decline.

I am long calls and I want to add positions next week when the market dips. Option implied volatilities have declined and this is a good time to buy premium. After the first few weeks of earnings I will start scaling out of positions and taking profits.

Get ready for a nice trading opportunity on the upside when we come back from holiday. Energy, tech and industrials look attractive. Wait for the dip and buy on support.

Have a safe holiday and celebrate the birth of this great nation. 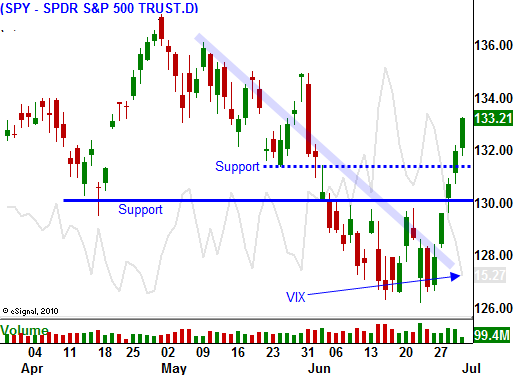