Greek Votes Expected To Pass. Look for A Rally Into The Weekend.

Now that’s the kind of bounce I have been looking for. The market rallied believing that Greece would pass the first of two votes. That took place this morning and that sentiment turned out to be correct. Protests have turned violent and they will escalate ahead of tomorrow’s critical vote. Rumor has it that the Prime Minister has 154 votes and he only needs 150. The margin has improved and the market is preparing for a positive outcome.

Regardless, I don’t believe the ECB/IMF would let Greece default. This positive outcome simply makes the bailout process easier. I still believe that Spain and Italy are much more important to monitor. In both cases, interest rates have poked through resistance and they are making new highs for the year. The magnitude of the move is small and we don’t want to see rates trending higher. China’s Premier Wen is making his rounds in Europe and he has been very supportive. As long as China buys PIIGS bonds, the financial crisis won’t escalate.

With Greece out of the way this week, the remaining economic news is fairly light. China will release its PMI and based on the flash number last week, expectations are low. Many analysts feel that a decline in economic activity means that China will stop tightening. Premier Wen declared victory on inflation last week and perhaps they will hold off on future interest rate hikes.

Industrial production increased 5.7% in Japan and that is a good sign. It means that the earthquake did not have a lasting effect and we are likely to see a “V” bottom. Manufacturing in the US is growing, but at a slower pace. Chicago PMI and ISM manufacturing will be released this week. The expectations are low and any surprise will come on the upside.

The market tends to rally into major holidays. I am expecting positive price action on light volume and we could see short covering.

Next week, jobs data will be released. Further deterioration will have a negative impact on the market, but it will be temporary. Earnings season is approaching and that has been bullish for the market the last two years. FedEx, Oracle and Nike all posted solid results and gave excellent guidance. Earnings will provide a boost, but it is the guidance I’m worried about once we get past the first two weeks of releases.

If by chance the Unemployment Report comes in better-than-expected next week, we could see a nice rally.

Later this morning, President Obama will address the nation. He will report on the debt ceiling discussions. Both sides are distant and two Senators left the negotiations. Anything he can add will be positive. This issue needs to get resolved in the next few weeks or we will see a major market decline.

For now, look for a nice rally into the weekend. Bulls have regained control and the news should be positive. I still like selling out of the money put credit spreads on strong stocks. This strategy has worked extremely well and the positions are benefiting from time decay and a collapse in implied volatilities. I’ve also been able to keep my distance during these uncertain times.

The SPY is above resistance at 130 and I am buying a handful of calls. These are short-term trades and I plan to be out of them by the close Friday. Industrials, energy and tech look strong. Use the Live Update Table as your guide and stick with stocks that have consistently been near the top. 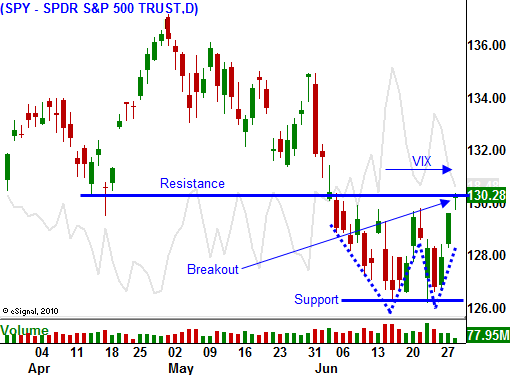