Options Trading: Soft Jobs Data Will Weigh On the Market. Buy Dips Once Support Is Established

Last week, the market surged after Greece passed both austerity votes. This instilled confidence and it was able to secure funding from the IMF/ECB. Economic releases were also slightly better than expected.

Traders had braced themselves for worst-case scenarios and they did not come to pass. Over the weekend, Greece received notification that it will get the first tranche of funding. As I’ve said before, Greece is a relatively small problem. French and German banks have about €40 billion worth of exposure and both are likely to voluntarily roll their bond maturities out. Spain and Italy are the two countries to watch. As long as interest rates are stable in these two counties, credit concerns will be contained.

This week, the focus will be on jobs. ADP employment, initial claims and the Unemployment Report will be released. Consensus estimates for the government’s report are for 83,000 new jobs in the month of June. The expectations have come down dramatically in the course of a month and I believe we will be able to hit this number. After a nice market surge last week, I believe stocks will take a breather on “soft” numbers.

Thursday, the ECB will release its statement. Analysts are expecting quarter-point rate hike and most believe that the rhetoric will be toned down and “strong vigilance” will be removed from the language. This rate hike is already priced into the market and if anything, it will have a bullish bias.

The Senate has agreed to stay in session this week so that it can work on the budget. That level of commitment is a good sign. Both parties need to reach an agreement in two weeks if they are going to make the August 2 “drop dead” date. The White House said it needs two weeks for staffers to write the legislation and the debt ceiling has to be raised well before August 2nd.

Stocks have rallied into earnings season for eight straight quarters and I believe they will push higher next week. Oracle, FedEx and Nike set the tone last week. Revenues were strong and the guidance was very positive. Bank stocks have been pummeled and they will dominate the first two weeks of earnings. I believe financial stocks are due for a bounce and this will propel the entire market. Tech stocks have also struggled and the strongest companies release in the first two weeks of earnings. I believe this sector will also lead the charge.

Once this earnings rally subsides, quiet trading will settle in. By mid-August, we will be ready for another market decline. Soft guidance on the backend of earnings season and deteriorating economic conditions will spook investors.

This week I am in “watch and wait” mode. I want to buy calls once support is established. Option premiums have declined and calls are relatively cheap. I like tech, energy and industrials. Be patient and buy dips. 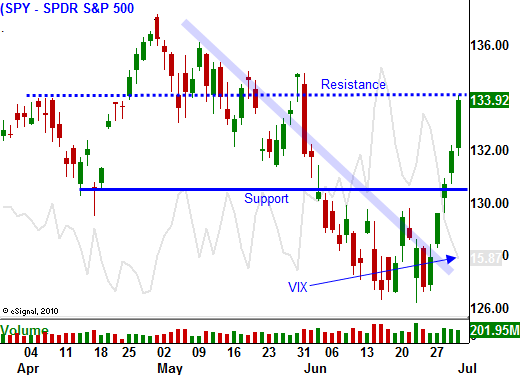