Options Trading: The News Was Not Good Today – Look For A Pullback This Week – Buy On Support

Last week, the market rocketed higher on light volume and the rally felt tenuous. Traders were preparing for the holiday and no one wanted to stand in the way. The outcome in Greece, existing home sales and end of month/end of quarter fund buying attracted investors. As the market rebounded, shorts ran for cover and that also fueled the rally.

As I mentioned, the market is vulnerable to a pullback this week. Jobs data will likely come in soft and profit-taking will set in. This morning, Challenger Gray & Christmas reported that planned job cuts rose 11.6% in June. That seems like a bad number, but the pace of downsizing fell to the lowest level in 11 years.

Tomorrow, we will get ADP employment and initial claims. Consensus estimates are for 60,000 new jobs in the private sector. That number has come down in the last month and I believe we will be able to hit it. Initial claims are expected to stay around 425,000. Friday, analysts are expecting the government to report 83,000 new jobs in the month of June. The estimates have come down dramatically in the last month and these numbers should be attainable.

The news this morning was quite bearish. ISM services came in at 53.3 (below estimates), Moody’s cut Portugal’s debt rating to junk and China raised interest rates. The combination of these events is weighing on the market.

The ISM services number is above 50 and that indicates economic expansion. The fact that it is drifting lower is concerning, but not alarming.

The downgrade in Portugal should come as no surprise. They barely secured financing and they already questioned whether it would be enough. Now, most analysts believe they will need another injection. Two months ago, the Prime Minister resigned when his austerity plan was rejected. This country is in almost as much disarray as Greece.

The EU established a credit facility to finance all of the bailouts and they had better agree on policies soon so that they can ramp up bond auctions. The line for handouts is growing. Interest rates in Italy and Spain are on the rise today and they are close to the highs of the year. This is not a good sign.

Economic conditions in China have softened and most analysts felt that they would postpone a rate hike. In fact, two weeks ago Premier Wen announced that China had won the inflation battle. This tightening did not come as a surprise to me. Given China’s progressive actions this year, they will not stop until they are certain that prices are heading lower. This can only happen after economic activity declines from current levels. The entire world is counting on China to pull us out of this recession and any contraction will not be good for global markets.

Tomorrow, the ECB will raise interest rates. This move is expected and it should not have a major market impact. If they soften their rhetoric (and I believe they will), the market will have a positive reaction.

All told, the news was fairly negative today and I am surprised to see the market holding up so well. Weak jobs data should push the market lower this week and support at SPY 132 will be tested. This move will set up an excellent buying opportunity.

During the last eight quarters, stocks have rallied into earnings season. Once support is established, buyers will scoop up stocks ahead of earnings releases. I believe financials are oversold and they will bounce. I do not suggest taking long positions in banking stocks because I do not like the sector. However, they will provide a positive backdrop for the overall market. Tech stocks have also been beaten down and I’m expecting excellent results. The strongest companies (Intel, IBM, Apple and Google) announced early in that will set the tone.

I want to buy call options on this market dip once support is established. Option implied volatilities have declined and stock valuations are attractive. I believe we will get a nice two week push that could come close to challenging the highs of the year. As earnings season unfolds, profit-taking will keep a lid on the rally. Be ready to take profits on call positions and don’t get greedy. Once this final push is over, stocks should retreat in August.

Be patient and start lining up your picks. Look for breakouts to new relative highs. The stocks will pull back to the breakout and that support will hold as the market declines. Once the market regains its footing, these stocks will take off above the breakout. The Live Update table is littered with stocks just like this. 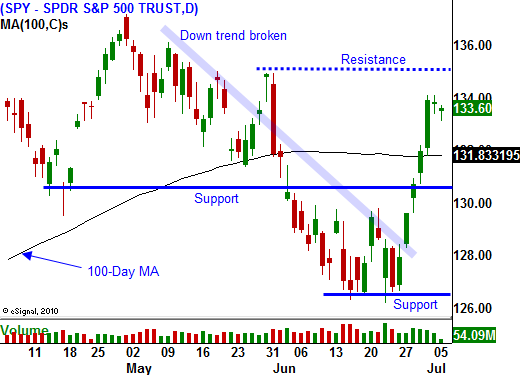