After a massive rally last week, you would expect a little softness this week. That has not been the case and the market has been able to hold its gains ahead of important employment data.

Yesterday, China raised interest rates. Their economy is starting to slow down and Premier Wen declared victory over inflation last week. Most analysts believed they would not hike again. Now that it’s done, they feel this is the last action for a while. China has aggressively tightened and I believe they will take further action. They won’t stop until they see a dramatic decline in inflation and that will only happen if their economy contracts. Surprisingly, this event did not spark a market decline.

This week, Moody’s downgraded Portugal’s debt. It is likely that they will need another round of capital. Interest rates in Italy and Spain rose to a new high for the year and this could be a concern. Fortunately, overnight bond auctions in Spain went well and rates should stabilize. This news yesterday should have generated selling pressure and it did not.

Yesterday, ISM services came in light. The service sector accounts for 80% of our economic activity and it came in below expectations at 53.5. The number is still above the critical 50 level and it indicates economic expansion. This release could have also sparked selling and it did not.

All three of these events had the potential to spoil last week’s rally. At very least we should have seen profit-taking and a small pullback. The market’s strength yesterday tells me it wants to move higher.

This morning, ADP employment showed that 157,000 jobs were added to the private sector in June. This was 100,000 jobs more than analysts had expected and the S&P 500 jumped on the news. Initial jobless claims have been steady at 420,000 during the last month and traders were bracing themselves for a weak jobs data. ADP processes payrolls for small and medium-sized businesses and they have their finger on the pulse of the labor market. This release should bode well for tomorrow’s Unemployment Report.

The consensus estimates for the government’s number are in the range of 80,000 new jobs. Private sector strength could offset public sector layoffs by a huge margin and we might get another good number tomorrow. The S&P 500 has rallied 13 points before the open this morning and much of the good news is already baked in.

Earnings season officially kicks off next week, but the big earnings announcements are still two weeks away. Stocks have rallied into earnings season the last eight quarters. Two weeks ago, FedEx, Oracle and Nike posted great numbers and gave excellent guidance. Overall, corporate profits were up 25% year-over-year last quarter and the S&P 500 is trading at a very low forward P/E of 13. Stocks are cheap and strong earnings will help the market forget about credit issues, the debt ceiling and soft economic releases for a few weeks.

This rally could test the highs of the year. Once resistance is established, I believe profit-taking will set in. Cautious guidance towards the back end of earnings season will weigh on stocks. Asset Managers will not aggressively buy stocks until the debt ceiling is raised. If this gets resolved in the next two weeks (unlikely), the market will jump higher. A temporary “fix” is more likely and this dark cloud will continue to loom. My biggest concern is that China will eventually tame inflation and that will lead to economic contraction. Credit concerns in Europe will continue to fester and yields in Italy and Spain will creep higher.

We have caught this entire rally and it still has some gas in the tank. In 2 to 3 weeks the momentum will stall and that is when we want to take profits on long positions. I would not buy into the rally this morning. Wait for pullback midday and try to buy calls on stocks that are near the top of the Live Update table. In particular, look for stocks that have consolidated over the last month or two in there now breaking out to a new relative high.

Option premiums are cheap and this is a great time to buy calls. The economic news next week is fairly light and the focus will be on earnings. Be patient and scale into positions. The market has already had a big run, don’t chase. 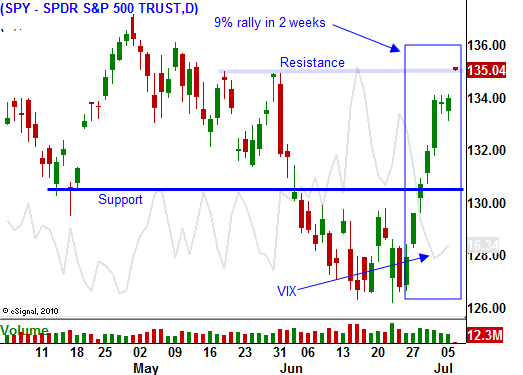