I mentioned yesterday that I was surprised by the market’s reaction to negative news events on Wednesday. After a massive rally last week, profit takers should have been anxious to lock in gains and they had every reason to earlier in the week.

Wednesday, China raised interest rates. Given the economic slowdown and Premier Wen’s claim of victory over inflation, analysts were expecting a pause before the next round of tightening. China has aggressively increased bank reserve requirements and hiked interest rates six times this year. Given their steadfast actions, I don’t believe they are close to being finished. In order for inflation to subside, China’s economic growth must slow dramatically. We could start to see this decline in the next month and global markets will have a bearish reaction.

From my perspective, this is the greatest current market risk. The entire world is counting on China to pull us out of this recession. The United States, Europe and Japan have recovered marginally because of fiscal stimulus and growth in China. Austerity measures will curb government spending and tightening will remove the Chinese growth engine. In the US, our economy is struggling to tread water and these two changes could push us into a double dip.

Greece received its funding and Portugal and /Italy are now in focus. Portugal will need another bailout infusion. Their debt was downgraded to junk this week and Italian banks were downgraded by Moody’s. Italian interest rates have broken out to new highs for the year and they are creeping higher. If this continues, it will be problematic. Higher yields mean that risk is getting priced into their bonds and it makes it more expensive to attract capital. Spain had a good bond auction this week and its rates are stable for the time being. These downgrades last Wednesday should’ve also sparked selling, but they did not.

Yesterday, ADP employment showed that 157,000 new jobs were added to the private sector. This was 100,000 more than analysts had expected and everyone scrambled to raise their estimates for today’s Unemployment Report. Only 18,000 new jobs were created in June (100,000 less than expected). The unemployment rate rose to 9.2% and last month’s jobs number was revised lower. ADP processes payrolls for small and medium-sized businesses and I trust their number more than I do the government’s.

Today’s market selloff is over exaggerated if you just look at the jobs number. In reality, stocks rallied 8% in a matter of two weeks and that rebound was over extended. Light holiday trading, end of quarter fund buying and short covering pushed the market higher. Now the market is pulling back into a range where it deserves to be. The market is simply taking back yesterday’s gains.

I mentioned last week that I was looking for a pullback to SPY 132 this week. The bid to the market has been a little stronger than I expected and we might not retrace as much as I thought. In any case, this pullback is a buying opportunity. We simply have to wait for signs of support.

Next week, the economic releases are light. The focus will be on earnings and they have been excellent. Financial stocks have been beaten down and they have room to bounce. That will provide a bullish backdrop for the market. During the last eight earnings seasons, stocks have rallied into the announcements and I believe that same pattern will hold true during the next two weeks.

Once this surge higher plays out, the table will be set for another decline. Deteriorating economic conditions in China will be the primary concern and that is unavoidable given their tight monetary policies. Corporate guidance will be cautious and stocks won’t rally even after posting great results. European credit concerns will fester and our debt ceiling will start to weigh on the market if a temporary solution is not in place by the end of July.

I still think we have a very nice tradable move to the upside and I am buying calls on this dip. Once the rally stalls I will be quick to take profits. If the concerns I outlined start to surface, I will buy longer-term put options that expire September or October. The next decline could easily take out support at SPY 125 especially if the debt ceiling is not raised.

Be patient and wait for support. As I mentioned in yesterday’s comments, look for stocks that broke out to a new relative high last week. They should be pulling back to that breakout level (now support) and holding that level with ease. If the market continues to slip and they’re able to stay above that level, they will jump when the market recovers. Also look for strong stocks that are in an uptrend (as opposed to stocks that have pulled back and formed a base). This next rally will be strong and brief and you want a “fast horse” that already has momentum.

After the initial reaction to the Unemployment Report, the market has stabilized. I feel the downside is relatively contained heading into the weekend. There is no reason to take a position today unless we get an afternoon rebound. Try to keep your powder dry and wait for an opportunity early next week. 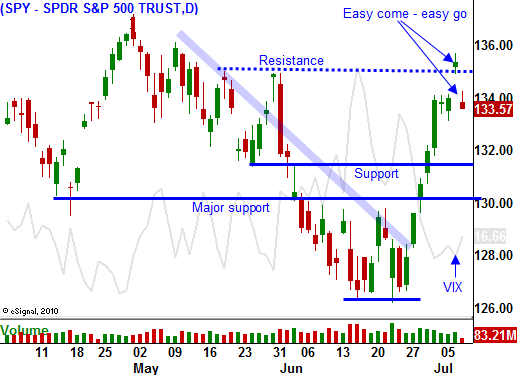