Yesterday, the market was able to stage a relief rally after Monday’s drubbing. China posted stronger growth than expected (GDP and Industrial Production) and credit worries in Europe eased as Italy prepared for an austerity vote. The credit conditions are worsening and a stiff undertow has developed. Stocks declined late in the afternoon and most of the gains were erased.

Overnight, Italy held a five-year bond auction and the bid was rather weak. Interest rates spiked to 4.93% from the 3.9% a month ago. Risk is getting priced into their debt and they are on a very slippery slope. Once this trend gains momentum, it is almost impossible to stop. We have reached a critical juncture and the first “material” default could be months away. Italy’s GDP is six times that of Greece.

Interest rates need to stabilize in the next few weeks or fear will escalate. China has supported Euro bond auctions and they could come to the rescue. If the do not, conditions will deteriorate quickly.

Debt ceiling talks in the US are not going well. Last night, President Obama walked out after a heated exchange. Moody’s has placed the US on alert and it could downgrade our debt if an agreement is not reached in the next week or two. Credit markets are extremely vulnerable and even a temporary default would send stocks tumbling.

Moody’s downgraded Ireland’s debt and they have warned about a possible downgrade for Italy. Standard & Poor’s is also considering a downgrade for Italy. This would push interest rates higher and fear will grow quickly. The ECB has not agreed on bailout policies and it cannot ramp up its credit facility.

The EU is very fragmented and the Greek bailout was tenuous. Anti-EU demonstrations have broken out in stronger countries and Finland almost prevented the Greek bailout a few months ago. A unanimous consensus among EU members is required for bailouts and one little country can stop the entire process. Now that Italy (six times larger) has entered the picture, the dissension will grow.

As I mentioned before, this new information is critical. I’ve been waiting for signs that the Euro crisis will escalate and this development changes everything. All of the great earnings and economic news in the world can’t offset the spread of fear.

This morning, initial jobless claims declined slightly, inflation was a little “hot” (PPI) and retail sales were better than expected. This news was friendly and it put a slight bid under the market. J.P. Morgan posted a 13% rise in net income on 6.6% higher revenue. Traders liked the number and the stock is up 3% in early trading. As I mentioned earlier in the week, financials have been beaten down and I believe they will provide a positive backdrop for the market the next two weeks.

Earnings estimates have been lowered, making it easier for companies to “beat”. Revenue and income growth should be solid and some of the strongest companies release early in the earnings cycle. Tech stocks have also been beaten down and I believe they will rally after announcing. Typically, this news would result in a sustained rally. Stocks are undervalued and they have room to run as long as the guidance is decent. Unfortunately, the credit landscape has changed recently.

Politicians need to wake up and realize that they are playing with dynamite. As the debt ceiling deadline approaches, the market will send a warning sign if they have not reached an agreement. We will see a swift, steep decline and that could come on a Moody’s downgrade. Even if politicians reach an agreement, it will take two weeks to write up the legislation. This needs to get resolved in the next week or two to avoid a massive selloff.

The good news is that this can quickly be resolved. US credit concerns will immediately subside and the market will stage a relief rally. The same cannot be said for Europe. The credit crisis is spreading like cancer and now it has reached major organs (Spain and Italy).

Asset Managers will not buy stocks in this environment no matter how good the earnings are. I believe they will look for opportunities to unload stocks. That means the earnings rally will be shallow.
If politicians can’t reach a debt ceiling agreement, the current level could represent the market high for the next few months. The price action is likely to get very nasty after next week.

Given my forecast, I am looking to unload my call positions over the next few days. I don’t have large positions and it will be easy for me to reduce my risk exposure.

I am hoping for a nice rally in the financial sector. These will be the best shorts and I will be looking for opportunities to buy puts. I can’t load up on positions because Washington might come to its senses and that would result in a substantial relief rally.

If China does not commit to buying Italian debt, we could be at the beginning of the next financial crisis. It could take a year or more to reach a critical stage, but fear will grow at an accelerated pace now that larger countries are involved.

Today’s rally should be rather contained. Make sure you have stops on your long call positions and exit these trades if support is breached. 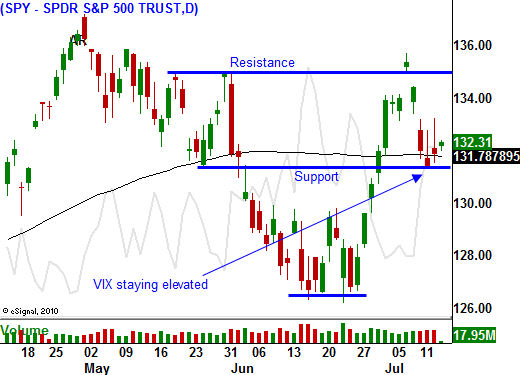