Earnings Rally Will Be Muted If Debt Ceiling Is Not Raised

This has been a tough week for the market and it has been a tough week personally. The good news is that all of my systems are back up after the worst storm in decades. Commonwealth Edison said that 850,000 homes in the Chicago area were without power. I tried to conduct my analysis away from my office, but I was a fish out of water trying to put all the puzzle pieces together. All of my systems are back online.

As for the market, Euro credit concerns are back on the front burner. Greece is likely to get its next tranche of payments in the next few days. This “hot spot” had barely been resolved when issues in Italy started popping up. Moody’s downgraded its banks and interest rates broke out to a new high for the year. That momentum continued ahead of austerity voting and the market prepared for the first material sovereign crisis.

Italy and Spain have large economies and a bailout in either country would easily be five times the size of Greece. Risk is getting priced into their debt and during Italy’s short-term bond auction this week, interest rates spiked from 2% to 3 1/2% in the course of a month. This is problematic if the rates continue to climb. The austerity vote should pass today and fear has temporarily eased.

In the US, the debt ceiling deadline looms. Even if politicians agree to raise it, they will need two weeks to write up the legislation. Moody’s said that it would downgrade our debt late in July if Washington is not making sufficient progress. That timeline is coming up quickly and the probability for a sharp market decline increases every day.

As I mentioned in yesterday’s comments, politicians might have a false sense of security if they look back to 1995. During that time period, Congress waited six months to raise the debt ceiling and the market did not decline. Conditions are much worse now. Our national debt has reached $14 trillion, the unemployment rate is 9%, we narrowly escaped a financial crisis and credit concerns in Europe are escalating. Many pension funds are required to invest in AAA rated bonds and a downgrade of our debt could force massive liquidations.

All of the other news is rather minor by comparison. These issues need to be resolved in short order or they will weigh on the market. Earnings will be decent and estimates have been reduced to the point where most companies should be able to “beat” with ease. The ensuing rally will be brief if credit concerns continue.

This morning, China released its GDP and industrial production. Both were better than expected and that sparked a rally in Asia. Even after six rate hikes and six increases in bank reserve requirements this year, their economy forges ahead.

Today, Ben Bernanke will testify before Congress. This is typically a chance for politicians to get on their soap box and grill the Fed Chairman. The rhetoric should be more negative than positive.

Tomorrow, we will get earnings from J.P. Morgan and Google. In both cases, the stocks have been beaten down and I believe any surprise will come on the upside. Financials should be able to rally from deeply depressed levels and that will provide a nice market backdrop the next two weeks. I do not like these stocks long-term due to increasing regulation, rising interest rates and a looming credit crisis. Once the rally stalls, financials will be ripe for shorting.

Tech stocks have also been beaten down and I believe they are attractively valued at current levels. I also like energy stocks.

Prior to the spike in Italian interest rates, I was looking for a nice tradable earnings rally. Now I am tenuous. Credit concerns will keep a lid on this market and Asset Managers will not aggressively buy stocks with all of the looming issues. If the debt ceiling is temporarily raised, a substantial rally could get underway. Unfortunately, this does not look likely and politicians continue to play “chicken”.

I am keeping my positions very small. We might have two weeks before debt ceiling worries kick in. I believe earnings will be strong in first two weeks and the market will rally. After that, guidance will get cautious and the market will stall. I have a handful of call positions and I am not currently adding to them. If you don’t have any exposure, consider buying a few in the money calls that will move point for point with the underlying stock and be prepared to take profits quickly. As long as the SPY stays above 132, I am content with this strategy.

Focus on stocks that have held up well and are breaking out to new highs. Today’s rally should continue and the rest of the week should have a positive bias. 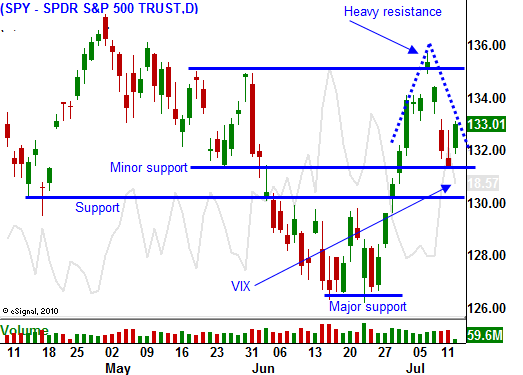