Stocks have been very lethargic this week. After a large decline on Monday, they have not been able to recover. Decent earnings and economic news has not been able to overpower credit fears.

China’s GDP and industrial production, initial claims, PPI and retail sales were all “market friendly”. Earnings from J.P. Morgan and Google were excellent. The market has tried to rally on the news, but late day selling has erased the gains.

The biggest development has been a spike in Italian interest rates. Moody’s and Standard & Poor’s are considering a downgrade. Italy’s economy is six times the size of Greece and a bailout could fragment the entire EU. We recently witnessed the dissension when one small country needed aid.

Once interest rates start to climb because of credit risk, that trend is almost impossible to reverse. Two things could stabilize Italian rates. The ECB could agree on bailout policies that they could ramp up their credit facility. Secondly, China could step up to the plate and verbally commit to supporting Italian bond auctions.

Moody’s downgraded Ireland’s debt this week and Portugal’s debt was downgraded to junk last week. They placed the US on alert and they plan to downgrade our AAA rating if politicians don’t raise the debt ceiling in the next two weeks.

The debt ceiling talks were a little more cordial yesterday after Wednesday’s blowup. During those discussions, President Obama walked out. He has not been one to negotiate throughout his term. He rammed Obamacare through Congress and he slammed the Republican budget proposal immediately after it was released. By the same token, Republicans are not budging. Newly elected Tea Party representatives feel that they have leverage to get budget cuts. The clock is ticking and the debt ceiling needs to get raised quickly.

There is a new proposal that Republicans will agree to raise the debt ceiling by $2.7 trillion if $1.7 trillion worth of spending cuts are made. The President will have to request $900 billion in three separate tranches over the next year and a half. The idea is that the burden of our growing national debt will be squarely placed on the President’s shoulders heading into 2012 elections. Republicans are starting to embrace the idea, but they are still hoping for a better agreement.

The market has not factored in the default. Investors can’t imagine that our elected officials could be so irresponsible and they believe the debt ceiling will get raised. With each passing day, fear will grow. This morning, President Obama will address the public. He can’t risk alienating Republicans so I don’t believe he will do any finger-pointing. Instead, he will appeal to both parties in an attempt to find middle ground. The speech won’t have much of an impact. He simply wants to appear as if he is doing all he can.

The economic news next week is fairly light and the focus will clearly be on earnings. Estimates have been lowered and I believe corporations will handily beat. Guidance could be cautious given the recent economic soft patch and credit concerns. Banks have been beaten down and I believe they have room to run. This would provide a nice backdrop for the rest of the market. Tech stocks have also struggled and they should bounce.

The debt ceiling and Euro credit concerns are likely to keep a lid on this rally. If I see stocks sell off after posting great earnings, it will tell me that Asset Managers are reducing risk and they are selling into strength. This would be a very bearish sign.

I am out of all of my long positions and my put credit spreads will expire today. Yesterday, I started buying puts. I believe the market has 2% to 3% upside potential and 7% to 10% downside potential in the next few weeks. I am not loading up on positions since a debt ceiling agreement could destroy these puts.

I don’t believe Washington will make any progress next week and fear will surface. The market will decline and it will send a clear message to politicians. Only then will they understand the magnitude of the situation. I plan to exit my positions during that decline. This is a short-term trade and I’m staying with SPY puts. I suggest buying a handful of them heading into next week. 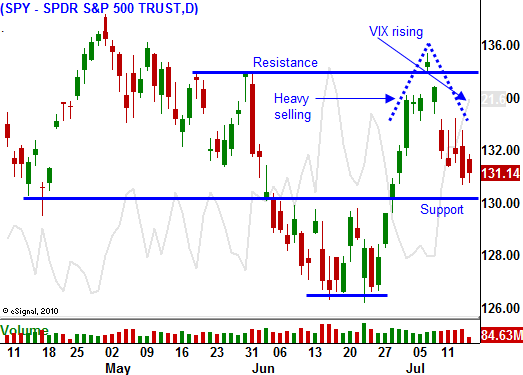