Last week, credit fears gripped the market. Interest rates in Italy climbed and the debt ceiling has not been raised. Even solid earnings and decent economic news did not spark buying. Each time the market tried to rally, late day selling erased the gains.

Standard & Poor’s and Moody’s placed Italy on alert and its debt rating could be lowered. Italian interest rates broke out to a new two-year high and they continue to climb today. Spain’s interest rates have also broken out to the upside in sympathy. This Thursday, European officials will hold a summit to discuss bailout policies. Given their casual approach, they do not seem overly concerned. The problem is growing quickly and if they don’t forge a macro plan, the market will get anxious.

Europe conducted another “stress test” and most analysts feel it was a joke. Out of 91 banks only nine failed. J.P. Morgan conducted its own stress test using information from the release. It concluded that 20 out of 27 banks would fail. European markets were weak this morning and PIIGS interest rates are rising.

There seems to be a backstop in place. Republicans are proposing a $2.7 trillion increase during the next 18 months. President Obama would have to request the money from Congress in three separate $900 million tranches. This would place all of the blame for current budget deficits squarely on President Obama’s shoulders heading into 2012 elections. Republicans still want to try for budget cuts, but this might be their fallback plan.

Politicians won’t make tough decisions until the market forces them to. I believe they will toy around with the debt ceiling until they cause a massive market decline. That could come on and Moody’s/S&P downgrade. Once panic sets in, they will get serious and back a plan.

Given these macro conditions, corporations are likely to give cautious guidance. There is no reason for them to stick their neck out. Earnings estimates have been lowered and companies should be able to beat. The initial reaction to the releases will be decent over the next two weeks, but stocks will hit stiff resistance.

The week is filled with major earnings announcements. Bank stocks posted good numbers last week, but the price action has been negative. Analysts don’t like the reliance on bad debt write-downs and this has been one of the primary bottom line contributors. Intel, IBM, Apple, Microsoft, SanDisk will set the tone for tech stocks. They have been beaten down and I believe they will bounce.

The economic news this week is fairly light. The biggest release will be a flash reading of China’s PMI Wednesday night. They continue to tighten and sooner or later we will see contraction. When that happens, global markets will decline.

With each passing day, the likelihood of a large market decline increases if the debt ceiling is not raised. Global credit conditions are already tenuous and this would spark a wave of panic selling. Many pension funds can only invest in AAA rated bonds and they would have to sell US treasuries. I don’t believe the problem will get to this point, but this is the type of “wake-up call” Washington responses to.

The market is broken support at SPY 132 and is currently testing the 130 level. If we close below it, the selling pressure will increase. I believe the earnings news will generally be bullish, but credit concerns will limit the rally. Investors will sell into strength and they will head for the sidelines until some of these issues are resolved.

Last week, I told you to exit long positions and to buy SPY puts. If you followed that advice, you are in nice shape this morning. I don’t want to load up on bearish positions. If politicians do the unexpected and they raise the debt ceiling, stocks will rally on the news. For now, I am comfortable watching the market drift lower with a modest put position. Given the early price action, we are likely to close below SPY 130 and we could see selling into the closing bell. If we hit a big “air pocket” on the downside, sell a few of your puts and take profits. 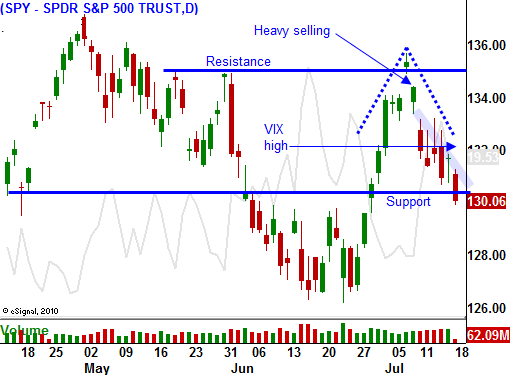