Earnings Euphoria Should Wane By The Close. This Rally Will Hit Stiff Resistance

Yesterday, the market was disappointed with lack of progress made on the debt ceiling. Today the House will vote on a deficit reduction plan that includes a spending cap and a balanced budget amendment. This might get through the House, but it will get shot down in the Senate. This plan is a complete waste of time since it would be vetoed by the President if it did pass. Each day the probability of a swift market decline increases.

Standard & Poor’s and Moody’s are prepared to downgrade US debt. Even if the debt ceiling is raised, these rating agencies want to see $4 trillion in deficit cuts over the next 10 years. Anything less will signal that we are not able to live within our means.

The temporary proposal (The McConnell Option) is gaining traction and it might be a fallback option. Republicans would agree to let the President raise the debt ceiling by $900 billion in three tranches over the next 18 months. The burden of our national debt would squarely be placed on his shoulders into the 2012 elections. This proposal might also include immediate spending cuts to make it more palatable for Republicans.

This is not what either party wants, but they know a default would be devastating. Interest rates would spike and it would make it much more costly for our country to access capital in the future. Standard & Poor’s and Moody’s would not find this acceptable unless it included substantial cuts. The debt ceiling would get raised in this scenario and we could still lose our AAA rating.

I don’t see this playing out well. If the debt ceiling is raised without any austerity, the market will stage a relief rally and quickly reverse. Both parties have a history of negotiating for more, but they are incapable of negotiating for less. A year ago, taxes needed to be raised and spending cuts were required. That would have reduced our deficit. Instead, Republicans fought to keep Bush tax credits in place and Democrats battled for payroll tax reductions and the extension of unemployment benefits. This “compromise” made the deficit bigger, not smaller.

Europe has issues and they continue to grow on a daily basis. Interest rates are climbing in Italy and Spain. Both countries are too large to fail and too large to bail. Combined, they are more than 10 times the size of Greece. Standard & Poor’s and Moody’s are prepared to lower their credit ratings. EU officials are meeting this week to discuss bailout policies. They don’t seem to have a sense of urgency. Emergency meetings should have been scheduled before this and they were not.

The European bank stress test was considered a joke by Wall Street. Less than 10% of the banks failed the test. J.P. Morgan used the information from this exercise and it conducted its own stress test. Out of 27 banks, 20 failed.

The dark storm clouds will part for a few days while the biggest and strongest companies in the world report earnings. The first two weeks of the earnings season are typically very bullish.

Overnight, IBM and WYNN posted excellent results. After the close today, Apple will report. I’m expecting a good number, but Apple has a tendency to sell off after the results are posted if the stock has rallied into the number. It is making a new all-time high and it could be vulnerable. Tomorrow, Intel will release its earnings. The results will be good and the stock should set a positive tone for the beaten-down semiconductor group.

Goldman Sachs posted its results this morning and it missed. Financial stocks have not rallied and they will not provide the market support I thought they would. Trading revenues are down and IPOs have not performed well recently. New regulations are pending and most of the profits have come from a reduction in debt loan write-offs.

There is no doubt that stocks are cheap. Earnings were up 25% year-over-year last quarter and the S&P 500 trades at a forward P/E of 13. If not for sovereign credit issues, the market would be off to the races.

Today’s price action will be very telling. Investors have all of the good news they need to scoop up shares. I believe Asset Managers will sell into this strength to reduce risk. They will also buy puts for protection as the market rebounds. This will keep a lid on the rally and the VIX will stay elevated. The risk profile for this market has increased and investors will not be sticking their neck out.

I am still holding on to my puts and I knew I would take a little heat. The market is chopping back and forth and the focus will be on earnings for the next few days. The big economic events this week include the Euro credit meetings, debt ceiling talks and China’s flash PMI release Wednesday evening.

I want to see this rally stall by mid-day and I want to see the earnings euphoria wane into the close. Ideally, most of today’s early gains will be erased. When stocks start to decline on great earnings, we will be close to a swift sell-off. 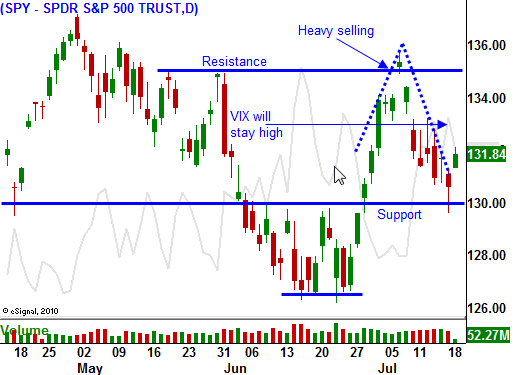