Yesterday, the market staged an early rally after Republicans and Democrats reached a debt ceiling agreement. The House voted last night and the plan passed by a wide margin. This morning, the Senate will vote and the market is already pricing in a victory. The President has already said that he will sign off and a default will be avoided.

With all of this uncertainty removed from the market, many traders were expecting a rally. Stocks sold off 30 minutes after the open yesterday and the S&P 500 is down 12 points this morning. As I mentioned last week, a stiff undertow has developed. Everyone was focused on the debt ceiling and the potential for a relief rally. Meanwhile, economic conditions were deteriorating globally and the Euro credit crisis was escalating.

Interest rates in Spain and Italy are spiking. Italy needs to raise €150 billion in the next month and bond auctions have done poorly. Spain’s Prime Minister is postponing his vacation (almost unheard of in Europe) to monitor economic conditions. The European credit facility won’t be able to buy Italian or Spanish bonds for at least three or four months because the deal needs to be ratified by national parliaments. The sharks smell blood and they know that no one will come to the rescue. Interest rates in Spain have been spiking even though China is supporting their auctions.

I have been watching interest rates in these two countries for many months. They are too big to bail and too big to fail. By comparison, Greece is a tiny problem and the EU has struggled for more than a year to find a solution. Combined, Spain and Italy are 12 times larger. The bailouts require a unanimous EU vote and one small country like Finland can throw a wrench into the entire process. Conditions are very fragile and they will continue to escalate.

EU officials are vacationing and there is no sense of urgency. Even when Greece needed immediate aid a month ago, emergency meetings were not scheduled. Now the credit crisis cancer has spread to major organs (Spain and Italy). The problem will be much more difficult to solve and the entire landscape has changed. Ten-year bond yields in both countries have reached 6 1/2%. History tells us that once interest rates reach this level on default concerns, we’ve hit a flashpoint.

In the US, our credit issues will grow. This deal is nothing more than a short-term solution. Republicans and Democrats signed off on it to avoid default. It will do little to cut expenses and it does not address structural problems. A new “Super Committee” has been formed to look for new solutions. When politicians can’t agree, they form a new committee.

In February 2010, a committee was formed to address structural issues. After 18 months of deliberation, the best compromise they could come up with was to raise the eligibility age for Social Security by two years over the next six decades. What a monumental accomplishment! We can expect similar results from the new “Super Committee”.

Economic conditions are contracting globally. The PMI in China and Europe declined in July and it is teetering above the contraction level. Last week, GDP came in at 1.3% and durable goods orders fell 2%. Yesterday, ISM manufacturing fell to 50.9. Caterpillar, 3M and UPS all cited slowing economic conditions ahead. Activity is declining and the “silver bullets” have been fired.

Fiscal stimulus is ended and the $800 billion has been spent. Furthermore, the government has to trim money from its budget and this will put even more pressure on the economy. The Fed is not considering QE3 and given the ineffectiveness of QE2, action on their part might not help. During the last two years, we benefited from an inventory rebuild. That impetus is also gone. Growth in emerging markets aided our fragile recovery and now that China is slamming on the brakes with both feet, that “driver” is also AWOL.

I am long puts and I have weathered the storm. My greatest fear was that politicians would strike a meaningful deal and the market would stage a relief rally. Yesterday’s reversal after 30 minutes of trading gave me confidence. Traders were looking to short that rally and that is why it was so short-lived. Bears have control and they will get more and more aggressive now that earnings season has passed the half way point.

I don’t believe credit agencies will downgrade our debt. There is a conflict of interest. The government wants to hang them out to dry for the 2008 financial crisis and they are going to regulate their compensation models. If Moody’s or S&P drop the US below AAA, they can expect a severe backlash when their business models are reviewed. I have not heard one analyst mentioned this, but I know this is a factor.

The jobs numbers this week won’t be good but they won’t be disastrous either. The market will want to rally on the results, but sellers will quickly unload stocks on any strength. European credit concerns will escalate quickly and EU officials are “unarmed”. Their casual approach has left them flat-footed and even if they wanted to, they can’t provide funding. That means this could turn into a full-blown crisis in coming weeks. 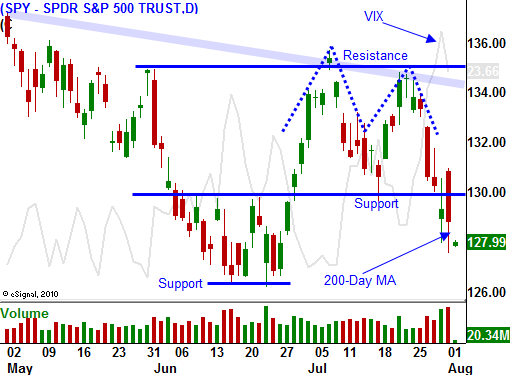