Next 2 Months Will Be Bearish. Take Profits On Puts and Look To Re-enter On Failed Rally

Yesterday, the Senate passed the debt ceiling plan and the President approved it. Neither party was excited about the accomplishment. Republicans have forced Washington to take a baby step towards a balanced budget and they might feel a bit more positive. The market sold off dramatically on the news and the relief rally lasted 30 minutes Monday morning.

Credit ratings agencies said they would not downgrade our AAA rating. Not one analyst has mentioned this angle, but it makes perfect sense to me. Politicians want to castrate ratings agencies for the 2008 financial debacle. They are evaluating the compensation model and they want to reform it. Moody’s and Fitch know that if they take a hard line and lower our debt rating, they will suffer a severe backlash. Once again, there is a conflict of interest.

China’s ratings agencies are not bound by the same conditions and they instantly downgraded our debt. The approved plan fell way short of the $4 trillion deficit reduction ratings agencies were looking for. We also don’t know where the proposed cuts will come from.

As I mentioned last week, this entire setup was like a magic act. Everyone was focused on earnings and the likelihood that default would be avoided. In the meantime, economic conditions were deteriorating (durable goods, GDP and China’s PMI) and European credit concerns were escalating. When the smoke cleared, traders realized that the world might be heading into a “double dip recession”.

I believe this will become clear in a few more weeks. Business inventories have been rebuilt from the 2009 lows and this catalyst has run its course. The government has spent the $800 billion stimulus fund and now the focus is on cost-cutting. This will have a “double whammy effect” on economic activity. The Fed ended QE2 and it said that it is not considering QE3. That policy did little to simulate the economy anyway. Finally, China is slamming on the brakes and they could easily hike interest rates next week.

Emerging market economies are heavily influenced by higher food and energy costs. More than one third of discretionary spending is used for these two items and inflation is a major concern. Ultimately, inflation could lead to civil unrest and China wants to avoid this at all costs. Consequently, they will tighten until inflation subsides. Their economy has been a global growth “engine” and a slowdown will impact the world. I believe this is the greatest current market threat.

Credit conditions in Europe are dire, but this debacle will take many months to unfold. The landscape has changed dramatically now that Spain and Italy are at risk. Tomorrow, Spain will auction €3.5 billion in bonds. China has committed to supporting its bond auctions and it knows that this could be the straw that breaks the camel’s back. They will aggressively bid for bonds. I also believe the ECB will actively support the bond auction. Interest rates will drop temporarily and the market will breathe a sigh of relief.

Italy has had massive debt levels for over a decade. It has been able to control the slide and it was quick to approve austerity measures. In many other countries, debt is escalating at a fast pace and this is not the case in Italy. It does have to finance €150 billion in debt in coming weeks and this could be an issue.

The EU has taken the entire debt crisis very casually. At a time when the new credit facility needs to be raising funds, officials are vacationing. The parliament of each country needs to approve new bailouts and this process could take months. All it takes is one little country like Finland to stop the process

This morning, ADP showed that 114,000 new jobs were added to the private sector in July. That was better than expected, but it did not have a lasting impact on the market. ISM services fell to 52.7 and analysts were looking for 53.6. Given Monday’s horrible ISM manufacturing number, I thought this release was pretty “friendly”. The economy is slowing down, but it is still growing. Last week, initial claims fell below 400,000 for the first time in 15 weeks. Analysts are expecting 405,000 and anything close will be a welcome sign.

Worst-case scenarios are priced into Friday’s Unemployment Report. Analysts are looking for 84,000 new jobs. Even if we see zero job growth, I believe the market will be able to shoulder the news.

I AM NOT BULLISH!! However, I believe we are due for a bounce and I am taking profits on my put positions. The VIX is elevated and the threat of a US default has passed. Earnings have been excellent and we are just below major support. Any good news will spark a short covering rally and implied volatilities will drop. This rally will be brief and it will set up another shorting opportunity.

During the next few weeks I will use this approach. I will try to maintain short positions and I will exit my puts when we hit an air pocket. I will reestablish short positions on failed rallies.

I expect to see market support today. A favorable bond auction in Spain will set a positive tone for tomorrow’s open. Initial claims will calm nerves and the market will bounce. Traders won’t get too excited ahead of Friday’s number so the rally will be contained. Bears have a lot of confidence and they won’t be shaken out. There may be a small amount of profit taking on short positions tomorrow and that will push the market higher.

There’s a great amount of fear heading into the Unemployment Report. As long as we have positive job growth (no matter how small) the market will find support. Take profits on put positions and be patient. 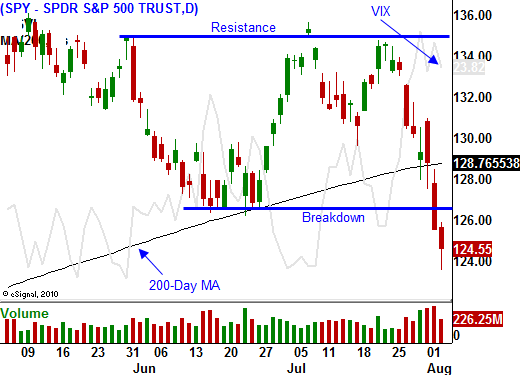