This morning, the S&P 500 surged 16 points before the open on news that politicians had reached a debt ceiling agreement. The relief rally lasted about 30 minutes and stocks quickly retreated.

The “watered-down solution” will raise the debt ceiling and trim a meager $2.4 trillion from the deficit over the next decade. The Senate will vote on the proposal first and if it passes the House will vote. Currently, experts feel that 80 to 100 Republicans might vote against it and Boehner will have to attract that many votes from the Democrats to get it through. If this passes, rating agencies could downgrade our debt.

Last Friday, Moody’s said that it might not downgrade the US even if it does an evaluation. Once again, there is a conflict of interest. Politicians want to castrate ratings agencies for the financial debacle in 2009. These companies are making money “coming and going” and Washington wants to revamp their compensation model. Now, these same ratings agencies are about to downgrade the very government that regulates its industry. If they take a hard line with our credit rating, you can bet their future revenues will suffer as politicians retaliate. From where I sit, I don’t need Moody’s to tell me that our government can’t control spending.

Credit conditions in Europe continue to deteriorate as well. The new bail-out fund cannot legally raise funds until all national parliaments ratify the summit deal. The chambers have shut down for the summer and Europe’s leaders are on vacation. This credit facility needs to ramp up and raise €2 trillion quickly. There is no sense of urgency. Interest rates in Spain and Italy are jumping higher today and they are making new highs for the year. This is a very concerning development and the entire Euro credit crisis landscape has changed dramatically.

This morning, China’s PMI came in slightly better than the flash reading two weeks ago. The government said it would stay vigilant and is committed to defeating inflation. China’s economy will slow and this will weigh on global markets.

Economic conditions are deteriorating in the US. Last week, GDP came in at 1.3% when 1.8% was expected. The market sold off on the news, but the damage was relatively contained. Traders did not want to go home short into the weekend when a debt ceiling deal was possible. The threat of a relief rally has passed and bears now know that they can short the market with confidence.

This morning, ISM manufacturing fell to 50.9 when a reading of 54 was expected. This is just above the critical 50 level and our economy is barely creeping along. Wednesday, ADP will release its employment number. Analysts are expecting 100,000 new private sector jobs (down from 157,000 new jobs in June). Anything less than 100,000 will weigh on the market. Friday, the Unemployment Report will be released. Analysts are expecting 84,000 new jobs. That would be an improvement from 18,000 jobs in June.

The market was prepared for a debt ceiling deal. Traders did not want to short the market based on an economic slowdown because they did not know the magnitude of the relief rally. Now we know that there is natural selling pressure and bears will step forward with confidence. The SPY is below support at 130 and it is below the 200-day moving average.

The debt ceiling crisis is not over but the market has priced in a solution. If this plan fails to get through the House we could see a very nasty decline. If it does pass, traders will start to focus on deteriorating economic conditions and a credit crisis in Europe. Either way, the market will move lower. Support at SPY 125 is likely to be tested this week.

I am adding to my put positions today. Any potential relief rally does not scare me. Traders will aggressively sell into rallies. 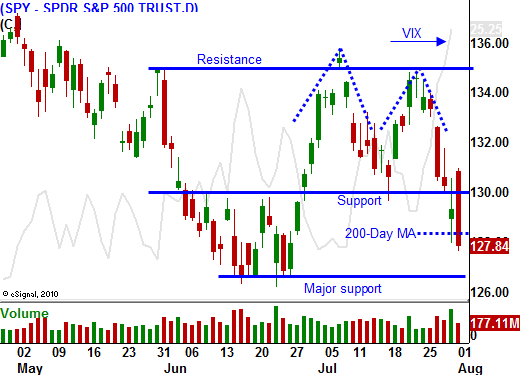