Yesterday, the market gave back all of Tuesday’s gains. We are seeing 5% moves on a daily basis and fear is spreading. The S&P 500 was trading 20 points higher overnight and this morning it is 20 points lower before the open. This type of volatility will continue and we are in for another rocky day.

Rumors (from undisclosed sources) are circulating that Chinese banks have cut off credit to certain French banks. Credit agencies are considering a downgrade because of PIIGS risk exposure and the probability of future bailouts. If the banking rumor is true, this would lead to the demise of these financial institutions and a new banking crisis would ensue.

China’s government dictates policy and I question the reliability of this rumor. They have actively been supporting Spanish bond auctions knowing that the bleeding needs to stop here. I doubt they would throw in the towel on France so quickly. It is an EU cornerstone and if it goes, the whole house of cards comes crashing down immediately.

Fear is spreading and political leaders are vacationing (probably on the beaches of Greece). There is no sense of urgency and it will take months to forge a plan that might restore confidence. Investors are bailing out and they remember how quickly the crisis escalated in 2008.

Washington DC has the highest per capita usage of cocaine, marijuana and heroin. On a daily basis our political leaders are caught in scandalous acts and Americans are fed up. Instead of addressing major social and economic issues a year ago, Congress grilled Roger Clemens to see if he was using steroids.
Congress has an approval rating of 18% and voters need to seriously vet candidates so that we can get competent people in our nation’s capital.

Now that Standard & Poor’s has downgraded our nation’s debt, they want to grill the CEO. Our elected officials want to deflect the blame. Congress, not the ratings agency ran up trillions of dollars in debt. Now we will waste precious time on these hearings. S&P already stated that ineffective leadership was one of the reasons they downgraded our debt.

All hopes are pinned on “Super Congress”. The President has polarized Republicans and Democrats and we know that extremists will keep anything from getting past in Congress. Consequently, we needed to form a new committee. It better be filled with moderates or we will fail again. I hope our nation learns its lesson. Be it Republican or Democrat, our President needs to be moderate. In times of crisis, he needs to pull both sides together, not inflame them.

I hate to make this political, but a lack of leadership is what’s driving our market. The solution is simple, but painful. Instead of trying to artificially stimulate the economy with wasteful fiscal spending and monetary policy, we need to tackle structural problems. Medicare needs to be reformed and Social Security eligibility needs to be raised progressively over the next 20 years. There will be rioting in the streets but that is minor compared to the chaos of a full-blown collapse if we keep heading down this road. Personal tax rates also need to be raised and we need to close loopholes with a flat tax.

Most wealthy Americans don’t mind paying higher taxes if they know it will be used to pay down our national debt. Unfortunately, they don’t trust the government. Every time Washington is flush with new revenues, spending increases. When Bill Clinton was in office, I did not mind paying higher taxes because spending was kept in check and our nation ran its first budget surplus in 40 years.

The Tea Party is getting blamed for our downgrade – how ridiculous. These politicians were elected to solve our nation’s debt crisis. They went to Washington unencumbered by “secret handshakes” and old promises. When it came time to vote, they represented their constituents. If not for the Tea Party, Congress would have automatically raised the debt ceiling without any spending cuts. Now, the dire state of our nation’s balance sheet is getting the attention it deserves.

As I stated yesterday, I would call Congress back into session and I would cancel my vacation if I was running the nation. I would make it clear that Congress needs to draft a plan to cut $6 trillion from our national debt over the next 10 years. That is above and beyond the $4 trillion ratings agencies are looking for and this is an opportunity to send a completely different message to the world. The plan needs to include increased tax revenues and entitlement reform.

The one thing I am opposed to is an increase in corporate taxes. We need to help the job creators and stop the mass exodus overseas. We should allow them to bring trillions of dollars back into the country at lower tax rate. That will boost investment spending and create jobs.

All of the good earnings and economic news in the world can’t overpower the backdrop that has been created in the last month. This morning, initial claims came in at 395,000. That was a decent number. Last night, CSCO beat estimates and it gave great guidance. This has put a bid under tech stocks.

Since I started writing my comments, the S&P has rallied 30 points and the open looks positive. Valuations are attractive, but around every corner there lurks a rumor that could spell disaster. With global leaders vacationing, the political landscape won’t change and bears are confidently shorting every rally.

I am selling put spreads. I feel we are near a low, but I want to distance myself from the action and I want to take advantage of rich options premiums. Even if the market declines, I have breathing room. If stocks flat line or rally, I will profit without breaking a sweat. Watch the price action in the last hour. If you see strength, add to put credit spread positions. 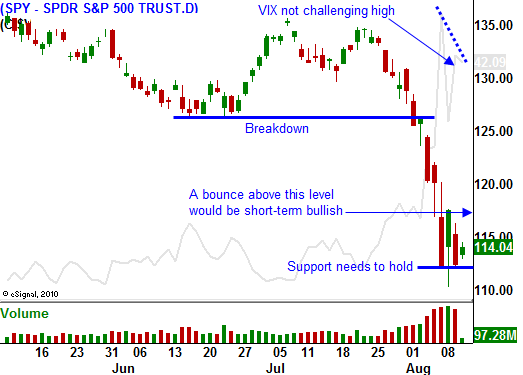