Lack of Leadership In Europe/US Leads to Selling. Valuations Look Great – No Confidence

Yesterday, the market rebounded ahead of the Fed’s statement. Traders expected that some action would be taken and they did not get a “gift” from the FOMC. The statement said that economic conditions are deteriorating and interest rates would remain low well into 2013. The market tanked on the news and then staged an impressive rally into the closing bell.

I loved the price action and the Fed’s decision. For decades, our leaders have been pumping the economy full of antibiotics every time it gets a sniffle. Recessions are healthy because they keep risk in check and they remove inefficiency (excess). Our economy needs to fight through cycles just like our body needs to naturally fight off disease. After 40 years of overuse, the penicillin is ineffective.

Yesterday, the Fed could have outlined another round of quantitative easing. The last maneuver didn’t work and the market would have rallied temporarily on the news. The government and the Fed need to turn off the respirator. Each attempt to artificially support the economy is adding to our national debt and the efforts are ineffective.

Perhaps the Fed has reached the same conclusion. They can keep interest rates low and monitor the situation. If the economy rebounds, no one will fault them for raising rates before 2013 if conditions are improving. From a trading standpoint, the market is no longer waiting for this “booster shot”.

The overnight news was decent. Starting in Asia, China’s trade surplus was excellent. Furthermore, it appears that they will not raise interest rates in the immediate future. They plan to hold off during these times of uncertainty. In Europe, interest rates in Spain and Italy pulled back. The ECB and China are supporting bond auctions. Domestically, mortgage applications rose 21.7% last week. Any strength in the housing sector will increase consumer confidence.

The market is down because of credit concerns. The whole damn world is on vacation and the sense of urgency is low. European politicians, Congress and the President are all taking time off while the market waits impatiently. Their lack of action is sending a clear message.

Two months ago, Greece needed another tranche of money to avoid default. ECB officials dragged their feet when an emergency meeting needed to be scheduled. This casual approach sparked a market sell-off. A few weeks later, interest rates spiked in Italy and Spain. The ECB should have jumped into action and drafted bailout plans. If they would’ve acted months ago, they could have been raising the necessary funds through bond auctions and fear would have been contained. Now, they are caught flat-footed.

Rumors are circulating that France could lose its credit rating because of the money it is lending to “Club Med”. Their debt levels are just as high as ours and their unemployment rate is even higher. All things being equal, they should be downgraded.

In Germany, Prime Minister Merkle is losing her constituency. Voters don’t want to jeopardize the country’s credit rating and bailout resistance is growing. Even if Germany agrees to future bailouts, one small country can upset the apple cart. A few months ago, Finland reluctantly agreed to Portugal’s bailout. Now, Slovakia says it will reject any changes to the rescue plan. The EU will be very strained now that Spain and Italy have entered the fray.

Washington sent a message last week. Politicians are not able to effectively reduce budget deficits. The best they can do was a “watered-down solution”. If we want markets to stabilize, there is an easy solution.

First of all, stop artificially supporting the economy. Stop fiscal stimulus (wasted money on high-speed rails and payroll tax reductions) and stop quantitative easing. These actions are not adding jobs and they are not making our country more competitive. They are dragging us further and further into debt.

Secondly, President Obama needs to get off his ass. Cancel your vacation and call Congress back in session. Immediately start taking steps to increase revenues (revamp tax laws) and restructure entitlement. Minimally, we need to cut $6 trillion from our national debt over the next 10 years. If politicians were able to pass such a bill in the next six weeks, the market would run right through the highs of the year. This is a time of crisis and opportunity. Great Presidents are remembered for their leadership during these moments.

The world needs this message and unfortunately, it won’t get delivered. Instead, the finger pointing will continue. I’m also not pinning my hope on the “Super Congress”

Investors are nervous and the nation’s leaders are AWOL during this time of crisis. The selling will continue until stock valuations will be so compelling that Asset Managers start nibbling. The volatility will come out of the market, but we won’t see big bounces until Washington takes decisive action.

I thought we might see a rebound today, but the heavy selling pressure tells me that investors are still heading for the exits. I like selling out of the money put spreads on strong stocks. I believe valuations are attractive enough at this level to attract buyers. We might not rally, but I don’t think we will head much lower. Option implied volatilities are rich and there is a nice edge to this strategy. Look for stocks that are still in a 2-year up trend, have strong horizontal support and are holding up relatively well in today’s decline. Sell the put spread below support and use that support as your stop if it is breached. Focus on August options that expire next week.

There is nothing to stop this drift lower. Be patient and scale into positions with the intent to add. If we get a nice end of day rally, add. 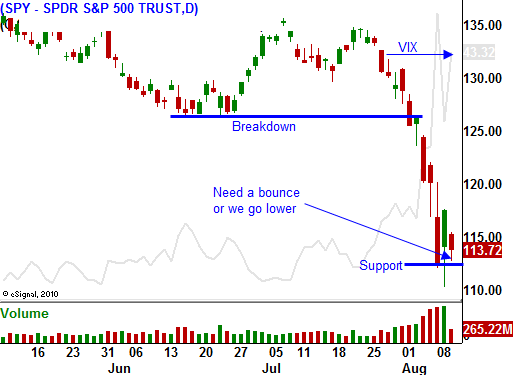