The Market Should Stabilize This Week and IV’s Will Decline. More Weakness Ahead.

Last week, the market established an all-time volatility record. Stocks gyrated wildly on credit downgrades and rumors. The threat of a double-dip recession also sent investors to the sidelines. This morning, stocks are adding to Friday’s gains and bargain hunters are nibbling.

On a temporary basis, the decline is overextended. Economic statistics (ADP, initial claims, Unemployment Report, ISM manufacturing and ISM services) have been decent. Earnings from Cisco and NVIDIA beat estimates and the guidance was excellent. The market did not like the fact that credit conditions were deteriorating and public officials went on vacation.

The leaders of Germany and Italy are meeting this week to discuss a potential bailout. This event is calming nerves and traders hope that Germany will eventually agree to the Eurobond. This would allow the EU to issue debt so that it can finance bailouts. Unfortunately, Germany is reluctant to sign off on the deal. Fiscal constraints for each member nation need to be put into place or the weak will continue their reckless ways. The consensus is that there won’t be any material developments during the meeting.

Last week, rumors circulated that France would be downgraded by a ratings agency. That should not come as a surprise. They have structural problems, lots of debt, high unemployment and a sluggish economy. France is also fully supporting bailouts and that will weigh on its balance sheet. Supposedly, Chinese banks were not trading with a number of French banks. These rumors were dispelled.

Standard & Poor’s warned that Japan’s credit rating could fall in coming weeks if it does not address massive budget deficits. I have been highlighting this for many months. Japan could be the source of a global credit crisis. If they lose their debt rating, interest rates will spike. They are currently at 1.25% on a 10 year and if that rate simply goes up to 2.5%, their total tax revenues will not cover their annual interest expense. Japanese citizens own 95% of the country’s debt and this would put an incredible strain on personal balance sheets.

In the US, we need decisive action. “Super Congress” must trim spending and they need to agree on a solution in coming weeks. The President needs to cancel his vacation and callback Congress. Politicians need to increase revenue and restructure entitlement immediately. If Washington miraculously agrees to a plan similar to “Cut, Cap and Balance”, confidence will be restored quickly. Don’t hold your breath; it’s not going to happen.

Republicans and Democrats are polarized and they can’t agree to a deal where one side might possibly have the upper hand. The finger-pointing and the arguing continue. If not for the Tea Party, Congress would have raised the debt ceiling and the budget deficits would not have been addressed. Ratings agencies would have downgraded us and we would be even worse shape. At least now the public is aware of the issues and our rating has been maintained by Fitch and Moody’s. Ironically, the Tea party is getting blamed for the downgrade.

Instead of working on a solution, Congress wants to grill the CEO of Standard & Poor’s. He is not responsible for our national debt, Congress is. This is a complete waste of time. Americans are fed up and Congress has the lowest approval rating ever (18%).

The market should be able to rebound, but the amplitude of each bounce will be smaller on a long-term basis. I believe the market will hit resistance in a couple of weeks and the downside will be tested again in September. Europeans will make little progress and concerns will flare up in Japan and the US. Politicians will forge temporary solutions and there will be promises for more austerity/restructuring in the future.

The market will find support in October and we will have a nice year-end rally. Earnings will be decent and economic conditions will not fall off a cliff. We will NOT make a new high for the year and each subsequent rally will make a lower high.

Long term economic conditions are deteriorating and there are no “drivers”. Fiscal stimulus has ended, the Fed is not considering QE3 (would not help anyway), inventories have been rebuilt and growth in China is slowing down. Globally, austerity will take a bite out of economic activity. Credit concerns will increase in 2012 and the EU will become fragmented. A bailout of Spain and Italy could cost more than €2 trillion and the stakes are much higher.

The news is fairly light this week. At best we will rebound to SPY 125. I have been selling put credit spreads. The IV’s are high and there is a nice edge to this trade. The rally should stall and a lack of action will spark another round of selling later in the month. For now, sell put spreads and take advantage of the rich premiums. 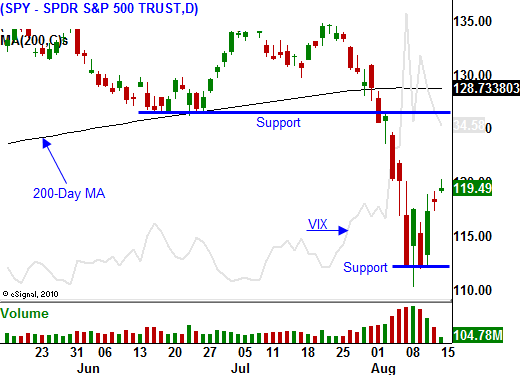