This Bounce Will Hit Resistance At SPY 125. Economic Slowdown Will Spark Selling In Sept

Yesterday, the market staged a nice rally and it added to Friday’s gains. The decline last week was overextended and this is nothing more than a bounce.

The issues that plagued the market last week are alive and well. Credit issues are popping up around the world. Europe is getting the most attention because it is fragmented. Germany is meeting with Italy today to discuss possible solutions. Both Prime Ministers are downplaying the event and we should not expect any major news.

The market would love to see Germany support a Eurobond. There are no policies to govern fiscal spending within the EU and this maneuver would weaken stronger nations. German citizens are opposed to the concept and Prime Minister Merkel is losing her popularity.

France has supported the bailouts and its own credit rating is now in jeopardy. The landscape has changed now that Spain and Italy have entered the fray. Combined, the bailout tab could hit €2 trillion. The crisis will escalate and the EU will become more fragmented with each passing month.

Japan is in dire straits and Standard & Poor’s warned them of a possible downgrade. Deficit spending continues and the earthquake has pushed them closer to the edge. If yields rise by 1.25%, all of their tax revenues won’t cover their interest expense.

Last week, our debt was downgraded. If “Super Congress” can’t reach an agreement in the prescribed time, we can expect Fitch and Moody’s to downgrade our debt. We are on a very slippery slope and it takes countries years to regain their AAA status.

No one has ever seen a global credit crisis so it will be impossible to time. When it happens, everything will unravel in a matter of weeks. I don’t believe we are near that point. First, we will get an onslaught of promises (spending cuts, tax hikes, entitlement reform…). The kitchen sink will be thrown at the problem. Each new promise will spark a brief rally and it will be followed by heavy selling. This type of price action will signal that everyone has lost faith.

Economic activity is easier to predict. There are signs of a global slowdown and I am fairly certain that we will have a double dip recession. The “drivers” are gone and austerity is starting to take its toll.

This morning, Germany announced that its GDP grew .1%. It has been the economic leader in the EU and this is a bearish sign. The entire EU grew GDP at a meager .2%.

In the US, Moody’s revised US GDP estimates for 2011 down to 2% from 3%. This is below the annual inflation rate and on a real basis, activity is already contracting. All of the government’s estimates are based on 4% growth and deficits will be much larger than expected because tax revenues will be down. A 1% decline in GDP results in $1T less in tax revenues.

Credit issues will fester and they will keep a lid on any rally. In the meantime, economic conditions will continue to deteriorate. With each weak release the market will be one step closer to retesting SPY 110.

I still believe this bounce has some upside. Stocks are cheap and bargain hunters are scooping up shares. With interest rates at historic lows, Asset Managers are willing to take the risk. For this reason, I have been selling out of the money put credit spreads. I believe the SPY could reach 125 before hitting resistance. Towards the end of August, the selling pressure will build and September could get nasty.

The news is fairly light this week. The CPI/PPI won’t influence the market too much. Look for quiet trading and a decline in implied volatility. Last week we experienced some of the biggest swings ever and I believe option expiration could be a non-event. I am not selling any more put credit spreads. I’m happy with my positions and I don’t want to add risk at this time. Most of the spreads are in August and they will expire in a few days. That will give me a clean slate to work with next week. 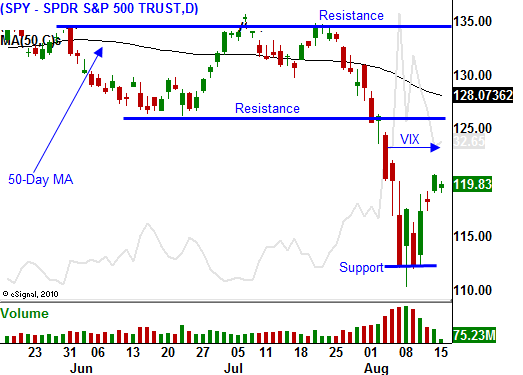